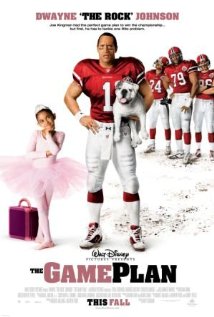 Joseph Kingman (Dwayne “the Rock” Johnson) is the highly successful but selfish quarterback for the Boston Rebels Gridiron team, who lives by the motto “Never say NO!” His very structured and football-focused life is turned upside down by the unexpected and unwanted appearance of his hitherto unknown daughter, Peyton (Madison Pettis). Seven-year-old Peyton provides Joe with evidence of his paternity and, as her mother has had to go on a humanitarian trip to Africa, tells Jo she will be staying with him.
Joe begrudgingly accepts the situation, as does his agent, Stella (Kyra Sedgewick), who attempts to get what publicity she can out of the turn of events. Joe tries to maintain his season with the Rebels, but discovers that Peyton’s presence requires him to take on unwanted responsibilities and make compromises.
Through Peyton, Joe begins to see a life outside of the competitive and commercial world of football. Meanwhile, in Joe’s footballing world Peyton discovers that she has gained more than a father figure; she has gained a family.

Death and separation from a parent; Family relations

The Game Plan is a lightweight comedy about the importance of family love over material wealth. This movie may have appeal to young girls, but is likely to be of limited interest to adolescents and adults. There are some strained slapstick and comedic moments, and scenes contrasting the rigours of the ballet and football training are amongst the few highlights.
Values that parents may wish to reinforce with their children include: