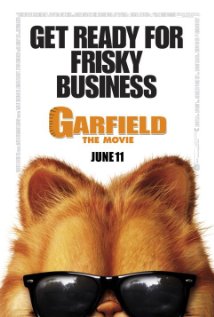 Garfield is a fat, lazy cat with attitude who freely roams his house and immediate neighbourhood but won’t venture out into the scary world beyond his cul-de-sac. However his world is turned upside down when owner Jon brings home a small dog called Odie in order to please veterinarian Liz on whom he has a crush.

Garfield soon lets Odie know who’s boss around the house, constantly kicking him out of his chair and favourite places. Garfield is concerned that Jon seems to be paying Odie more attention than him and lets Odie into places Garfield isn’t allowed. When Garfield is put outside one night, Odie takes pity on him and comes outside to be with him. Garfield however repays his kindness by getting back into the house shutting Odie out. Odie takes himself off for a walk but soon becomes lost. A kind lady takes him in but when she advertises the ‘found dog’ Odie is collected by ruthless Happy Chapman, a lame TV presenter, who wants the dog to help improve his act. Happy had previously seen Odie dance and had asked Jon to buy him but Jon refused.

Jon is now frantic because he thinks Odie has ‘run away’ and enlists Liz’s help to track him down. Garfield soon realises the trouble he’s caused and also sets out to find Odie.

There is quite a lot of slapstick violence in this movie, including the following:

Other violence that is not comic involves Garfield putting an electric collar on Happy and sending electric currents through him. Jon also punches Happy in the face.

A few scenes in this movie could scare children in this age group:

Any violence, including slapstick, can disturb children, particularly under the age of five.

Children in this age group may also be disturbed or scared by the scenes mentioned above.

It is unlikely that children over the age of eight would be scared by this movie.

The movie’s message is that behaving unkindly will cause unhappiness.