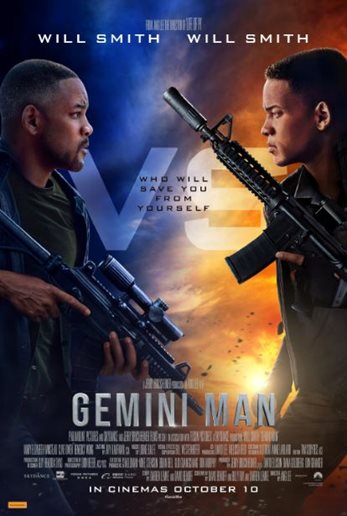 Not suitable under 13; parental guidance recommended to 15 (frequent action violence and coarse language)

Set in the present time, Henry Brogan (Will Smith) is an elite assassin for the ‘Defense Intelligence Agency’ (DIA). Now 51, and with 72 kills under his belt, he feels it is time to retire. However, Henry then gets tipped off that the DIA had presented him a spiked file of his last target, and consequently he did not actually kill a terrorist, but a scientist. As the DIA track his every move, they know that Henry has this classified knowledge and decide to eliminate him. At the same time, Henry uncovers and befriends another DIA agent, Danny Zakarweski (Mary Elizabeth Winstead), who was supposed to keep a close watch on him. Now both targets, they are on the run with the help of Henry's loyal friend Baron (Benedict Wong). As Henry is the highest skilled assassin, several attempts to kill him fail. It seems that only one man has what it takes to take Henry down: ‘Junior’ (also Will Smith), adopted son of Clay Verris (Clive Owen) who runs the mysterious paramilitary program ‘Gemini’. As Henry and Junior confront each other, they make a disturbing discovery: Junior looks like a young version of Henry. Danny suspects that Junior is a son that Henry does not know about, but a DNA test brings a far more shocking result: Junior is Henry's clone. Project ‘Gemini’ does not stop there, as Henry reveals the secret project in which human clones are genetically modified to remove pain, fear and doubt, making them the perfect soldiers for US military missions.

Gemini Man is a fast-paced science-fiction action movie, featuring Will Smith playing a double role as a ready-to-retire assassin, with computer animation creating his young clone. Frequent action violence and coarse language make it unsuitable for children under 13 and parental guidance is recommended for children aged 13 to 15.

The main message from this movie is that activities of secret government agencies and underground organisations create ethical dilemmas, both for individuals involved as well as society.