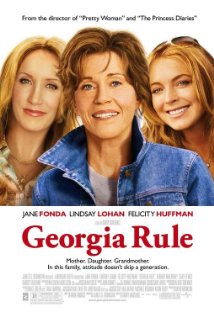 Not recommended under 15 (Themes, Sexual references)

Rachel Wilcox (Lindsay Lohan) is a disturbed, confused and sexually precocious teenager. Her mother, Lilly (Felicity Huffman) is unable to cope with her. Lilly, herself a rebellious teenager who rejected her strictly religious upbringing, is now dependent on alcohol. She decides that maybe her mother Georgia (Jane Fonda) might be able to help and so takes Rachel to Idaho to leave her there.
Rachel’s San Francisco upbringing has not prepared her for life in small town Idaho which has a majority Mormon population. There she meets Harlan (Garrett Hedlund), a young Mormon man, whom she determines to educate in the ways of the world. She also meets, and goes to work for, the local vet Simon (Dermot Mulroney), who has recently lost a wife and child in a car accident. It is to Simon that Rachel confides that her stepfather has been sexually abusing her since the age of 12. Simon of course informs Georgia, who then has to try to sort out not only Rachel’s disrupted life, but also her daughter Lilly’s as well.

Children in this age group are likely to be disturbed by the above scenes.

Children in this age group are likely to be disturbed by the above scenes.

In addition to the above mentioned violent scenes, there are some scenes in this movie that could disturb children under thirteen, including the following:

The above mentioned violent scenes could disturb children under fifteen.

Georgia Rule is a serious drama that shows the destructive effect that alcohol and sexual abuse can have on people’s lives.

This movie could give parents the opportunity to discuss with older children the destructive effects of alcohol abuse and attitudes and beliefs about sex and sexuality.