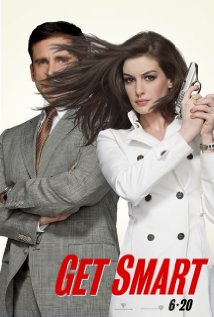 Not recommended under 8, Parental guidance to 13 due to violence, themes and coarse language.

Maxwell Smart (Steve Carell), US spy agency Control’s top analyst, harbours aspirations to be a field agent like his hero, Agent 23 (Dwayne “The Rock” Johnson). His boss, Chief (Alan Arkin), is reluctant to lose Max’s skills at headquarters, but when the evil KAOS organisation attacks Control central and kills off its agents, Chief has no choice but to give Max a chance.
Max is partnered with the experienced and beautiful Agent 99 (Anne Hathaway), who is unimpressed with her new associate. Max (now agent 86) and 99 set off for Eastern Europe and uncover an illegal nuclear arms deal, headed by KAOS operative, Siegfried (Terrence Stamp). In uncovering the KAOS plot, a possible double agent and the risk to the US president (James Caan), Max and 99 develop the respect, trust and friendship they need in order to save the day.

Children in this age group may also be disturbed by some of the scenes listed above.

Get Smart is a ‘good versus evil’ action spy comedy based on the television series of the 1960s. Young children may find some scenes scary and storyline a little complicated. Older children and adults are likely to enjoy the slapstick humour and the throw-away one liners.
Values in this movie that parents may wish to reinforce with their children include: