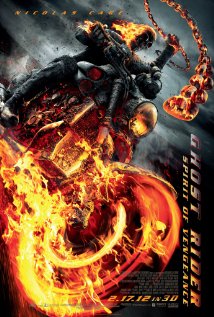 Not recommended under 13, PG to 15 (Viol. Disturbing scenes, Themes.)

The film opens with young Johnny Blaze (Matt Long) and his father Barton Blaze (Brett Cullen) jumping motorbikes through burning hoops at carnivals. To save his father from dying of lung cancer, Johnny signs his soul over to the devil, Mephistopheles (Peter Fonda), but Mephistopheles cheats Johnny when he causes Barton’s death in stunt which goes wrong. As a result Johnny runs away leaving behind both his carnival life and adolescent sweetheart Roxanne Simpson (Raquel Alessi).

Years later, a much older Johnny Blaze (Nicholas Cage) is a motorbike-riding superstar, cheating death at every corner. Roxanne (Eva Mendes), now a successful news reporter, turns up at one of Johnny’s performances asking for an interview and they renew their relationship. Four anti-heroes, Blackheart (Wes Bentley), the son of Mephistopheles and three fallen angels referred to as ‘the Hidden’ come to earth to recover a contract containing a list of a thousand souls promised to the devil.  Blackheart plans to take over the world and to stop him Mephistopheles gives Johnny the powers of the fabled Ghost Rider. These powers enable Johnny to transform into a fiery skull-faced supernatural bike-riding vigilante by night and return to his mortal self during daylight hours. In exchange for hunting down and destroying Blackheart and his cohorts, Mephistopheles offers to give Johnny his soul back.
With the help of the “Caretaker “(Sam Elliott), the Ghost Rider tracks down and defeats the Hidden one by one, but must face a final showdown

Selling one’s soul to the devil; Self destructive behaviour.

Ghost Rider contains superhero style violence, which is nevertheless both intense and brutal, including:
•Mephistopheles deliberately causes Johnny’s father to crash his bike, resulting in his death.
•Blackheart massacres a room full of people by sucking their life force from them. His victims transform into desiccated corpses at his touch.
•Ghost Rider races his bike up a city street, creating a force which causes a car to be thrown through a shop window and a motorcycle policeman to be thrown through the air.
•A mugger stabs Ghost Rider in the back with a knife. The Ghost Rider tells the mugger to “look into my eyes and feel the pain,” after which the mugger fails to the ground in a catatonic state with open wide eyes that appear fiery.
•A demon wraps a chain around the Ghost Rider’s neck and hangs him from a beam.
•A demon crashes a semi trailer head-on into the Ghost Rider, crushing him against the front of a stationary train.
•Ghost Rider transforms a length of chain into a burning whip, which he then lashes around the body of a demon causing the demon to burn like molten lava and then turn to ash.
•A mugger experiences flashbacks of all of the violent crimes he has committed, including stabbing and shootings.
•Johnny is surrounded by dozens of police officers with their guns pointed at him and is shot at close range.
•When he is placed in a prison cell, a dozen inmates attack Johnny punching and kicking him to the ground. He transforms into the Ghost Rider, throwing the inmates off. The scene ends with Johnny walking from the cell with all but one of the inmates left lying unconscious on the floor.
•The Ghost Rider uses a length of chain to lasso and then drag a helicopter down to a rooftop.
•The Ghost Rider uses a burning chain to create a mini burning tornado, which sucks in one of the demons and incinerates it.
•Blackheart touches Roxanne of the face causing her pain and black lines form on her face.
•A demon pulls the Ghost Rider into a lake and tries to drown him. In turn the Ghost Rider attacks the demon, dissolving him into mist.
•A violent/brutal fight between Blackheart and the Ghost Rider involving the two punching each other and throwing each other around. At one stage the Ghost Rider hurls flames at Blackheart’s face.
•Blackheart hurls Roxanne through the air to land unconscious on the ground.
•After being strangled by Blackheart, the Ghost Rider shoots Blackheart numerous times in the chest and face with a pump action shotgun, at one stage blowing Blackhearts head from his body.
•The Ghost Rider uses his powers to explode Blackheart’s body, blowing his flesh over walls and the floor.
•The Ghost Rider forces Blackheart to look into his eyes. Blackheart, who has now been consumed by a thousand evil souls, has to relive their previous crimes and, as a result, is left lying on the floor in a catatonic state.

In addition to the above-mentioned violent scenes, there are some scenes in this movie that could be very scary for, or disturb, children under the age of five, including the following:
•A demonic looking cowboy and horse are engulfed in flames.
•Images of people burning in hell.
•Mephistopheles has red glowing and smoking eyes.
•An evil-looking demonic shadow on a wall.
•Smoke comes from Johnny’s eyes after he is touched by Mephistopheles.
•Blackheart transforms from a handsome man into an evil monster with sharp fangs.
•Johnny crashes his stunt-bike during a stunt and the bike runs over him.
•One of the Hidden appears to be a water demon, and one of his eyes slides off his face.
•At numerous points throughout the film the faces of various human-looking demons transform to reveal more evil faces with sharp teeth.
•When Johnny first transforms into the Ghost Rider his hands and eyes begin to smoke and his feet burst into flames. He loses control of himself, both laughing and screaming while his face explodes and bursts into flames, leaving a burning skull behind. At one point during the film the Ghost Rider’s jaw is unhinged from his face.
•At one point, the Ghost Rider’s motorbike transforms into a living, demon-like "Hell cycle".
•The Caretaker uses a needle and thread to stitch up a long laceration in Johnny’s shoulder.
•When Blackheart releases the thousand evil souls they materialise as black, rotting corpses which invade a screaming Blackheart, entering his body through his chest, or forcing their way in through his mouth.
•In one scene, Blackheart’s flesh, which has been blown from his body is seen living and creeping together to reform his body.

Many children in this age group will also be disturbed by some of the above-mentioned scenes.

Many children in this age group will also be disturbed by some of the above-mentioned scenes.

Children closer to the age of thirteen years may also find some of the above-mentioned images disturbing.

Ghost Rider is a superhero style, supernatural, action film that targets adolescents and younger adult males. The special effects are impressive and the film contains some quite witty humour but also contains scary images and violence capable of disturbing children.

The message of the film is that good will triumph over evil and that living in fear is a very negative way to live your life.
Values in this movie that parents may wish to reinforce with their children include: