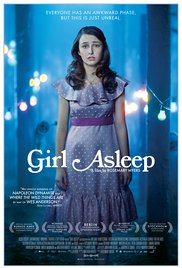 Not recommended under 12; parental guidance recommended 12 to 15, due to scary scenes, themes, sexual references and coarse language

This is a quirky and whimsical coming-of-age film set in 1970’s suburban Australia. Greta (Bethany Whitmore) has moved into a new neighbourhood and is about to turn 15. Life is embarrassing enough for her anyway, but when her parents (Amber McMahon and Matthew Whittett) decide to throw her a birthday party she feels completely out of her depth. As the guests arrive, Greta becomes overwhelmed and is thrown into a dream sequence that takes us deep into her imagination.

Growing up; fitting in at school; peer pressure; bullying; sexuality and sexual consent

There is some physical and verbal violence in this movie including:

Younger children in this age group may find some of the above scenes disturbing and may wish to discuss them with an adult.

There is fairly frequent coarse language in this movie, including:

Girl asleep is an original, funny and warm look at the inner world of adolescence. It explores what it feels like to become comfortable in your own skin as you grow up and mature. Although the film is very quirky and surreal at times, the anxieties and fears about growing up which it portrays are universal and real. There are a number of scenes which are likely to scare younger children, and due to the film’s themes, sexual references and coarse language, it is best suited to teenagers.

The main messages from this movie are that things that make us feel anxious, uncomfortable and worried might not be as bad as they seem, and can be overcome.