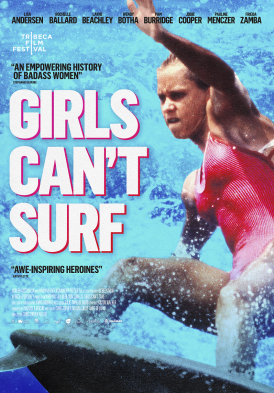 Not suitable under 12; parental guidance to 15 (themes, language, sexual objectification of women)

Girls Can’t Surf lifts the veil on a dark period of surfing history. It follows a band of female pioneers who chose to listen to the voice inside instead of the male dominated mantras echoing from every direction, telling them they would never measure up or be as good as the men who were riding the same waves that they were. The documentary gives viewers a personal glimpse into the lives of some of the best surfers to ever grace the sport, legends like Jodie Cooper, Pam Burridge, Pauline Menczer, Wendy Botha, Lisa Andersen and Layne Beachley, to name but a few. It takes audiences behind the scenes and allows them to see things through the eyes of these inspiring women who beat all the odds to come out on top. Audiences will learn about the personal challenges, disadvantages and struggles that these women faced and how they were dealt with and overcome. They will, hopefully, wince at the male mentality of the surfing culture during that time and will applaud the passion and resilience of these inspirational women that never made any money but who made an incredible difference and who changed the face of surfing not only in this country but all around the world.

Sexism; Gender inequality; Body image; Male chauvinism. Along with some lesser themes dealt with by individuals such as domestic abuse and alcoholism; anorexia and chronic illness; as well as poverty, homosexuality, adoption and finding your identity.

Girls Can’t Surf is a documentary that shines a light on a dark time in women’s surfing. Archival footage and photos are interwoven with personal interviews from many of the professional surfers, and a powerful story of passion, resilience, determination and triumph is the ultimate result. The film is best suited to older audiences and will be heartily appreciated by females and surfing fans.

The main messages from this movie are that it is not what happens to you that makes you, it is how you respond that matters most and that if you give women an opportunity they will make the world a far better place.