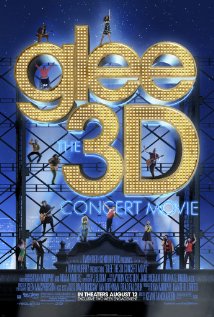 Lacks interest under 5; PG to 13 due to themes and sexual references.

Glee 3D brings together the cast of the very popular television series of the same name.  The concert movie is a musical journey featuring many favourite songs and dances from the series and the well loved teenage stars.

The film shows a live US music concert performed in 2010 by the Glee cast - Rachel (Lea Michele), Finn (Cory Monteith), Britney (Heather Morris), Artie (Kevin McHale), Kurt (Chris Colfer), Santana (Naya Rivera), Blaine (Daren Criss) and others. It has a loose plot that is carried via the various performances by the cast, behind the scene in-character interviews and comments from fans about how the series has affected their lives.  The movie explores in more depth the stories of three teenagers tackling big issues (dwarfism, Aspergers, and homosexuality) and the ways that their favourite character has helped them to contend with the difficulties that have confronted them.

Glee: The 3D Concert Movie is a. is an uplifting and positive movie starring the cast of the popular television series and inspiring the audience through some real life stories of “Gleeks” (Glee fans).

The main messages from this movie are about embracing difference and being proud of your own uniqueness.

How might this feel to be different?  How do you like your differences to be treated by others?