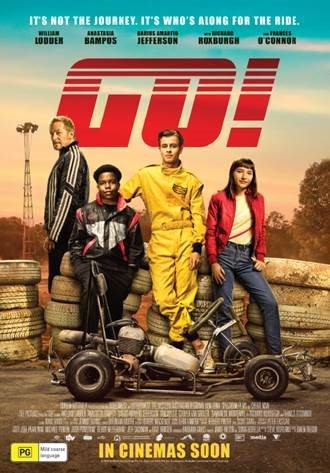 15-year-old Jack (William Lodder) and his mother Christie (Frances O'Connor) leave their Sydney home behind for a fresh start in a little country town in Western Australia. The local attraction is a go-kart racetrack, run by notoriously moody and withdrawn Patrick (Richard Roxburgh). Soon after his arrival, Jack discovers not only his passion but also his talent for motor racing. However, in order to beat local champion and bully Dean, he needs help. Unexpectedly, Dean's sister Mandy (Anastasia Bampos), clumsy but loyal mate Colin (Darius Amarfio-Jefferson), and eventually Patrick, a former successful race driver himself, come to his aid. Will Mandy's engineering talent and innovation, Colin's moral support, and Patrick's monosyllabic but priceless advice be enough to help Jack become the national go-kart champion? And will Jack be able to overcome his grief for his deceased Dad and beat his tendency to act recklessly and risk too much?

Go! is an Australian coming of age racing drama packed with positive role models and messages. Revolving around teenager Jack, the movie appeals to a tween and teenage audience. The excellent cast, great soundtrack and somewhat predictable yet heart-warming story make Go! a movie worth watching for families with tween and teen children.

The main message from this movie is that you cannot escape emotional baggage, instead, it is important to work through it, with the help of family and friends. A strong message in this movie is that it is okay for boys and men to show emotions and to talk about their fears. Another important message is that reckless behaviour is dangerous, and it is worth being patient and level-headed rather than pushing too far and taking too big a risk.