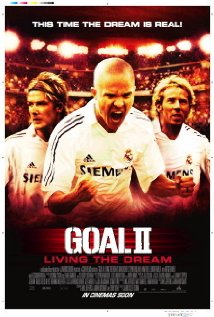 Goal II: Living the Dream picks up where Goal! left off. Santiago (Kuno Becker) and Roz (Anna Friel) have just bought a beautiful home together and are making arrangements for their upcoming marriage. Santiago is at the top of his game and has completely won over Newcastle United. Santiago learns that Real Madrid have their eye on him and are trying to sign him to their prestigious team which, despite an illustrious track record, in recent months has not been doing well.

Santiago is thrilled when he is signed on and begins playing for the Spanish team. He buys a mansion in Madrid, is given a Lamborghini, wears the best designer clothes, and slowly discovers all the ‘perks’ of his profession. Roz is unimpressed with all the extras and continues to commute from England where she still works as a nurse. Santiago, despite trying to do the right thing, grows more and more accustomed to his new lifestyle. He begins to lose sight of what is truly important and he slowly watches his personal life unravel. His relationship with Roz is on the rocks thanks to the flirtatious advances of Jordana Garcia (Leonor Varela) a well known talk show hostess, his manager Glen Foy (Stephen Dillane) resigns and a young boy Enrique (Jorge Jurado) shows up one day claiming to be his brother. Enrique shows Santiago a photo of his own mother Rosa (Elizabeth Pena) who had abandoned Santiago as a child. Attempting to come to terms with all the pressures and changes, Santiago hits an all time low but is determined to make it to the top again.

Family and relationship breakdown; the pressures of celebrity

In addition to the above-mentioned violent scenes there are some scenes in this movie that could scare or disturb children under five, including the following:

Goal II: Living the Dream is a dramatic film with much of the action taking place on the football field. While some audiences may find aspects that they enjoy, the film will most likely appeal to soccer fans and adolescent boys.

The main message from this movie is not to lose sight of what is really important in life and that fame and fortune are hollow without the love and support of family and true friends.