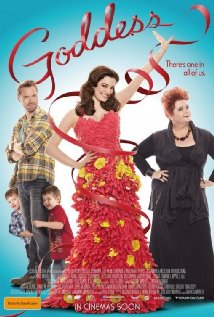 Not recommended under 8, PG to 13 (Themes; Coarse language; sexual references)

James (Ronan Keating) and Elspeth (Laura Michelle Kelly) have moved from the UK to an idyllic but remote farmhouse in Tasmania. James is able to continue his research into saving whales from there while Elspeth raises their two-year-old twin boys. James is often away for long periods and Elspeth finds the role of looking after the boys, who are very demanding, difficult.  Isolated, and with no family or friends for support, she is often lonely. She finds herself looking back to the days when she used to sing in bars back in the UK.

On one of his trips home James gives Elspeth a webcam to keep in touch with him while he is away. When she can never raise him on the webcam, Elspeth decides to record herself singing her ‘kitchen songs’ which she uploads on to the Internet. She becomes a household sensation and is picked up by the ‘Goddess’ firm to be the face of a new computer tablet designed for women. At first Elspeth is thrilled with the attention but she soon finds the price of fame  too much to bear.

There is some comic violence in this movie including:

Children in this age group may be confused by scenes in which Elspeth and James flirt with others.

Goddess is a romantic musical comedy. It is a very original, and quite refreshing, look at the difficulties that young mothers face in today’s world. It also looks at the ethical values of filming everyday activities and showing them on the Internet, particularly without a person’s knowledge. The film, rated PG, is not recommended for under 8s and parental guidance is recommended for 8-13 year olds. The coarse language, sexual references and themes make it more suitable for, and of more interest to, adolescents and adults

The main messages from this movie are that family is more important than fame and that the sacrifices needed to become famous are often not worth making.

Values in this movie that parents may wish to reinforce with their children include loyalty and forgiveness.