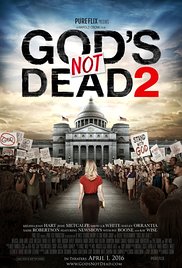 Not recommended under 10, parental guidance recommended 10 to 13 due to violence and themes.

God’s Not Dead 2, the sequel to God’s not dead and with some of the same characters, takes place in a United States public high school.  History teacher Grace Wesley (Melissa Joan Hart) is asked a question in relation to Martin Luther King’s non-violent approach during the civil rights movement. After Grace responds by reciting Jesus’ admonition to ‘Love your enemies, and pray for those who persecute you’, the reaction is extreme. A complaint is made against Grace for “preaching in class”, with many at the school suggesting that her inclusion of religion breached the confines of what should be taught within schools. The school board and American Civil Liberties Union both get involved, but despite this, Grace refuses to apologise for her choice of statement – she remains unwavering in her stance that she was not preaching but quoting and did nothing wrong.

As a result, the matter goes to court. Grace is represented by a kind-hearted lawyer named Tom Endler (Jesse Metcalfe), who is willing to take a chance on her and admires her resolution. The prosecution is led by the lead attorney from the American Civil Liberty Union, Peter Kane (Ray Wise). Throughout the court case, the film gradually becomes less about whether or not Grace made a wrong decision, and more about whether or not Grace and Tom can prove that Jesus was in fact a historical figure.

God’s Not Dead 2 is a film that focuses primarily on a struggle between individuals and public institutions. When Grace’s job is threatened and she is told that she must apologise for her inclusion of religion within class, she remains steadfast in her beliefs. She is presented as an inspired, motivated woman who will not buckle under the pressure. In standing by what she believes in the face of extreme opposition, she further inspires others to stand beside her. In doing so, the film highlights the importance of friendships and supportive relationships during challenging situations. The film also presents a critical perspective on whether religion has a place within a public education system, and emphasises the vastly different perspectives that exist on the matter.

The film’s themes and scenes of heated arguments make it more suitable to older children so it is not recommended for viewers under 13.