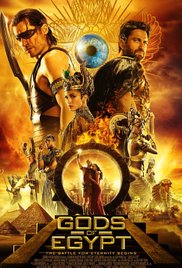 Not recommended under 15 due to violence, disturbing scenes and sexual references.

The god Osiris (Brian Brown) rules over the lands and people of Egypt but is about to hand his crown over to his son Horus, “Lord of the Air”.  (Nikolai Coster-Waldan) However on the day of the coronation, Osiris’s brother, the resentful, jealous and ambitious Set (Gerard Butler) arrives with an army and kills Osiris. Set then defeats Horus in combat, plucks out his eyes (which are the source of Horus’s power) and exiles him.

In the years that follow Set becomes a tyrant, enslaving the masses and murdering all who defy him. Hope arrives in the form of a young mortal named Bek (Brenton Thwaites) and his true love Zaya (Courtney Eaton). Zaya steals plans to the vault where Horus’s eyes are kept and convinces Bek to break into the vault, steal the eyes and return them to Horus, who with his superpowers returned can then defeat Set.

Bek manages to steal one of Horus’s eyes from the vault and escape, but at the cost of Zaya’s life. Bek makes a deal with Horus that, in exchange for his sight, Horus will bring Zaya back from the dead once he has defeated Set. After regaining his sight, Horus sets about taking revenge on Set and stopping the God of Darkness from destroying all of creation.

The film contains extended sequences of intense fantasy violence which are at times brutal and disturbing, although with an unrealistic lack of blood and gore (the gods have gold blood which lessens the impact). Examples include:

Most of this film would be very scary for children this age. There are many scary giant gods and mythical creatures such as minotaurs, giant elephants, giant scorpions and beetles, cobras with mouths full of sharp fangs. The gods transform into scary creatures with bird or dog characteristics and armoured statues become animated. The chaos demon is depicted as a giant maw filled with razor sharp teeth which can devour the whole of creation.

Children in this age group would also be disturbed by the above-mentioned violent and scary scenes.

Children in this age group would also be disturbed by many of the above-mentioned violent and scary scenes.

Younger children in this age group may also be disturbed by the above-mentioned violent and scary scenes.

The film contains some occasional low-level coarse language and name calling. Examples include:

Gods of Egypt is an epic action fantasy that targets adolescent males and is likely to attract younger teenage boys.  It has received a number of negative reviews for an uninteresting story line, bad acting and poor dialogue. At 127 minutes, it is also very long. The many violent and scary scenes and characters make it unsuitable for children and young teens. Parents may also be concerned about the sexual references and attitudes to women displayed in the film. It deserves its M rating and is not recommended for viewers under 15.

Parents may wish to discuss how the film depicts women - the manner in which the film objectifies women as sexual objects, and how this depiction could impact on young viewers.