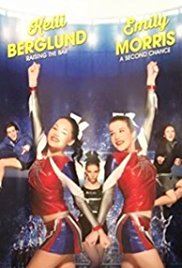 Not recommended under 5 due to lack of interest.

Seventeen year old Emma (Kelli Berglund) is used to moving around the world with her father who is in the air force. Sad to leave California, she is now moving to Adelaide, Australia. They are welcomed into their home by fellow air force officer Susan (Jo Stone) and her daughter Hannah (Emily Morris) who live next door. Hannah and Emily soon become friends and Hannah persuades Emily to join her gymnastics group, which has recently diminished due to a group of girls leaving to follow Abi (Elysia Markou) and Charlotte (Daisy Anderson) into cheerleading.

Emma has not previously done gymnastics but she was in a cheerleading squad back in the US and manages to convince Hannah’s group to also become cheerleaders. They go on to compete in the National Competitions against Abi’s group.

There is no physical violence but a lot of verbal hostility and nastiness between the competing cheerleading groups.

Girls wearing brief costumes and heavy make up for cheerleading.

There is some name-calling such as “losers”

Going for Gold is a sports drama about cheerleading. It is filmed in South Australia with a few nice screen shots of Adelaide and environs, but is badly let down by its poor acting, script and lack of storyline. It lacks interest for children under five, but primary school children and young teens might enjoy the gymnastic and dance sequences.

The main messages from this movie are the importance of working together as a group and to think about how one’s actions affect others.