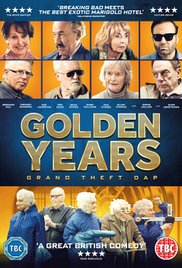 Not recommended under 13 due to themes, sexual references and scenes that may scare younger children.

Retirees Arthur (Bernard Hill) and Martha (Virginia McKenna) Goode enjoy a quiet, comfortable life socialising with friends and playing bowls and bingo at their local community club. However all that changes in a single day when Arthur learns that his wife in no longer eligible for health care and that his retirement fund has collapsed, leaving him and Martha penniless.  A number of Arthur and Martha’s friends from the club have suffered similar fates.

Feeling desperate, Arthur decides to rob the local bank, and through a comedy of errors and unexpected outcomes manages to get away with 50,000 pounds. When Martha accidentally discovers Arthur’s secret stash of bank notes, the pair decides that if Arthur can get away with robbing a bank by accident then they could definitely be successful with more planning, and embark on a spree of bank robberies.

The success of the robberies results in the police believing that they are looking for a well- organised gang of professional criminals.  Ageing detective Sid (Alun Armstrong), close to retirement age himself, and his trusty younger side-kick Dave (Nigel Allen) are determined to catch the gang but are hampered at every turn by the ambitious and backstabbing DI Stringer (Brad More).

When their community club needs to be saved, Arthur and Martha decide to call in the assistance of a few of their close friends to rob bank executives of their bonus fund, but all does not go as planned.

Ageing and the treatment of the elderly; relationships; bank robbery

The film contains some violence and accidental harm, much of it slapstick. Examples include:

The film contains covert sexual references and innuendo scattered throughout. Examples include:

There is some substance use. Examples include:

The film contains low-level language throughout and some name calling. Examples include:

Golden Years is a crime comedy targeting an older adolescent and adult audience who are likely to enjoy cheering for the unlikely heroes.  The cast includes some of Britain’s finest film and TV drama actors. The film is not recommended for children under 13 due to its themes, sexual references and a number of scenes that might scare younger children.

Values in this movie that parents may wish to reinforce with their children include fairness, selflessness and generosity.

Parents may wish to discuss with their children whether the characters depicted in the film were criminals, or the victims of crime, or both. Was breaking the law the only option open to the film’s characters to obtain justice?