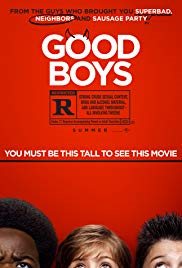 Not suitable under 15 (language, substance use, sexual references, adult humour)

When 12-year-old ‘Bean Bag Boys’, Max (Jacob Tremblay), Thor (Brady Noon), and Lucas (Keith L. Williams), are invited to a “kissing party”, they borrow Max’s father’s drone to spy on their teenage neighbours, Hannah (Molly Gordon) and Lily (Midori Francis), to get some mouth-to-mouth inspiration. After the girls capture the drone and refuse to give it back, the boys hatch a plan to replace it before Max’s dad finds out and stops them from going to the party. Things get complicated when the boys realise they have accidentally stolen MDMA (aka ecstasy/Molly) from Hannah and Lily, who will do anything to get it back.

The main messages from this movie are that friends are more important than being ‘popular’ and friendships grow and change, but that doesn’t mean you can’t stay close.