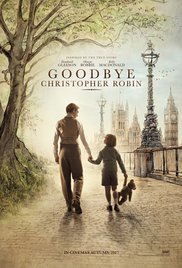 Not recommended under 12, parental guidance recommended 12 to 15 due to disturbing scenes and themes.

Goodbye Christopher Robin is an historical drama, set just after WW1, which tells how the much loved Winnie the Pooh books by AA. Milne were created. Alan Milne (Domhnall Gleeson) returns from the battlefields of WWI, traumatised and suffering from shell shock. He attempts to return to his career as a playwright in London but has difficulty adapting. He takes his wife Daphne (Margot Robbie) and their new baby son, Christopher Robin, to the country for peace and quiet. Daphne is portrayed as an ambitious socialite who loves partying and who delegates the bringing up of her son to a nanny called Olive (Kelly MacDonald) or Nou as Christopher Robin calls her. Daphne, at one point, leaves Alan and Christopher Robin (Will Tilston), who is called Billy Moon by his parents, to return to London.

Christopher Robin is an inquisitive and imaginative child who loves playing with his animal toys. He is distraught when Nou has to leave to attend her dying mother. Alan and Billy are left alone and it is during this period that the two actually bond. Alan takes Billy into his woods and the two play games, which inspire the writing of the Winnie the Pooh books.

War and the effects of war; childhood; the loss of childhood

Alan and Daphne kiss on a couple of occasions, once in bed.

Goodbye Christopher Robin is a beautifully filmed, nostalgic historical drama. Set in the glorious English countryside, it is visually attractive. The movie however, deals with some intense subjects such as post-traumatic stress disorder, father – son relationships, neglect and sadness. It is therefore, not a children’s movie but more targeted to an adult audience. The film is not recommended for children under 12 and parental guidance is recommended for the 12 to 15 age group.

The main message from this movie is that the most important thing for children is their parents’ love and time spent with them.

This movie could also give parents the opportunity to discuss with their children the importance of communicating how you feel. Why was it so hard for Christopher Robin’s parents to show any affection? They obviously loved him but were unable to hug or cuddle him at all. The only hugs came from Nou.