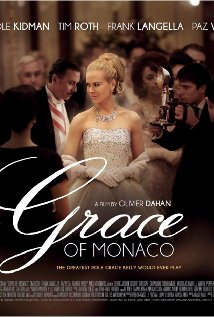 Not recommended under 12 due to themes and lack of interest

Grace of Monaco is a film that follows the story of Grace Kelly (Nicole Kidman), the former Hollywood star who married Prince Rainier III (Tim Roth) to become the Princess of Monaco. It takes place over two years in the early 1960s during which French president De Gaulle battles Prince Rainier over the tax laws. The situation between France and Monaco is tense, with a threat of invasion.

Soon however, Monaco is thrown into further turmoil after Grace is offered a role in Alfred Hitchcock’s new film. Six years into her marriage, Grace is forced to decide between following her own career and doing what her husband wants her to do for the sake of Monaco and its people. She soon begins to realise that playing the role of a Princess is just as much acting as any film role, and throws herself into the ‘role of a lifetime’.

There is minimal use of violence in the film. Examples include:

Apart from the scenes described above under 'Use of violence', there is nothing in this film that is likely to disturb children of this age

Apart from the scenes described above under 'Use of violence', there is nothing in this film that is likely to disturb children of this age

There are minimal sexual references, including:

There is minimal sexual activity within the film, including:

There is limited use of substances in the film, including:

Grace of Monaco is a film that demonstrates the difficulties of being part of a royal family, while presenting the contrasting view that love is an incredibly powerful emotion with the capacity to create change. The movie also depicts the destruction and devastation caused by opposing political agendas and governmental disputes, as well as the misery that can at times come within seemingly happy lives lived in the public eye. It highlights the lack of choice and freedom that Grace experiences after six years of marriage to a prince, but also demonstrates that people are ultimately able to make their own choices.

While there is little to disturb young children, the film is not recommended for children under 12. It lacks interest for under 12s, while raising a number of issues which could be discussed with teenagers.