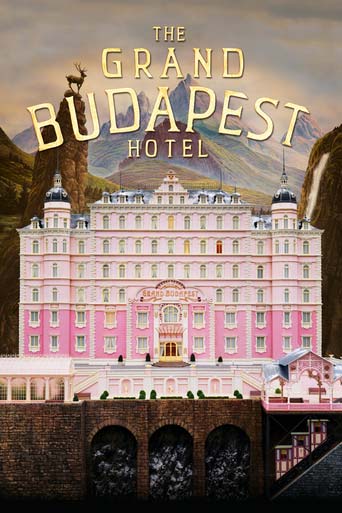 The story of the Grand Budapest Hotel is told by an author (played by both Jude Law and Tom Wilkinson), who has written the story as told to him by the ageing Zero Moustafa (F Murray Abraham).In 1932, when the story begins, teenager Zero Moustafa (Tony Revolori) starts work as lobby boy at the hotel in the snow covered mountains of the fictional country, Zubrowkan.

Zero is taken under the wing of the hotel’s legendary concierge Monsieur Gustave H. (Ralph Fiennes), the man responsible for absolutely everything that occurs at the hotel. Gustave’s real speciality lies in catering to the whims of the hotel’s older love-starved widows. One such widow is the elderly dowager the Countess Madame D. (Tilda Swinton), who has grave fears that her life is under threat.

Under Gustave’s careful supervision, Zero soon learns the ropes and becomes indispensable to Gustave. Zero also meets the love of his life, Agatha (Saoirse Ronan), a baker at the Mendl’s pastry shop.

When the Countess is found murdered, and Gustave is bequeathed a priceless painting “Boy with Apple” he suddenly finds himself conspired against by the Countess’s family, in particular her son Dmitri(Adrian Brody).  As a result, Gustave is arrested for the Countess’s murder and sent to prison. Not believing that he will be given a fair trial, Gustave - with the assistance of Zero and Agatha, and a number of fellow prisoners - escapes.

Gustave and Zero are now on the run both from the authorities and Dmitri’s murderous henchman J. G. Jopling (Willem Dafoe). Facing a dire situation, Gustave puts out an emergency call to his fellow hotel concierges, who arrange a rescue and escape, with the pair setting off to find the evidence needed to clear Gustave’s name.

Children in this age group are also likely to be disturbed by the scenes described above.

Younger children in this age group are also likely to be disturbed by some of the scenes described above.

Coarse language, and name calling are scattered throughout the film: examples include:

Grand Budapest Hotel is a clever and quirky comedy with a star-studded cast. It is recommended viewing for older adolescents and adults. The film’s violence, which is at times surprisingly brutal for an M rated film, the frequent coarse language and some of the sexual references make it unsuitable for younger teens, so it is not recommended for under 15s.