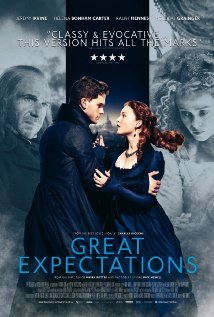 Not recommended under 14, PG to 15 due to violence and disturbing scenes and themes

Great Expectations is the latest telling of the popular Charles Dickens classic.  On a visit to his father’s grave, ten-year-old Pip (Toby Irvine and, as an adult, Jeremy Irvine) has a terrifying contact with the escaped convict Magwitch (Ralph Fiennes) who threatens the child in the hope of receiving food.  Feeling sorry for Magwitch, Pip displays great kindness and brings him food and drink as he requests.  The convict is later found and taken away, but the memory remains in Pip’s mind.

Pip was orphaned as a young child and spends his childhood growing up with his cruel older sister and her gentle husband Joe (Jason Flemyng).  Pip and Joe forge a strong love and friendship as Pip grows, guiding his life decisions and future.  After an invitation to meet with the local wealthy spinster Miss Havisham (Helena Bonham Carter), Pip meets the young Estella (Helena Barlow and, as an adult, Holiday Grainger) and quickly becomes besotted.  With hopes of winning the affections of the alluring Estella, Pip begins to dream of one day becoming a gentleman rather than take on his brother-in-law’s trade as a blacksmith

Years later an unexpected visitor arrives to see Pip at his home where he is working with Joe. Solicitor Mr Jaggers (Robbie Coltrane) has brought an offer from an unknown benefactor who wishes to give Pip his dream and make him a gentleman.

Cruelty to children; being an orphan; death and serious illness; crime, including murder

Children in this age group are also likely to be disturbed by a number of the above-mentioned scenes.

There is some kissing between adults

Great Expectations is the latest film version of one of Charles Dickens’ darker works, a story about a young man’s journey from poverty to wealth and the consequences of this social shift.

The main messages from this movie are about the effects of wealth on one’s social standing at the expense of important values such as compassion, decency, love and honour. Although children may read this book in upper primary or early high school years, parents should be aware that the movie is likely to have much greater impact and contains a number of violent and scary scenes and characters. The scenes involving the convict Magwitch, the treatment of Pip as a child, and the death of Miss Havisham in a fire are likely to be particularly disturbing for children under 14.  The film is therefore more suited to older teens and adults.

Parents of older children may wish to discuss: