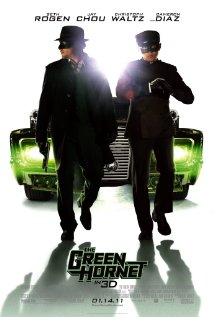 Not suitable under 13, not recommended 13-15 (violence; coarse language)

Britt Reid (Seth Rogan) is the son of the wealthy newspaper magnate James Reid (Tom Wilkinson). The film opens with his father’s funeral and the unveiling of a statue in honour of his dad. The newspaper, ‘The Daily Sentinel’ is a family owned business which should pass to Britt but he is doesn’t care whether the newspaper continues or not.

Britt bonds with Kato (Jay Chou), the newspaper’s very talented chauffeur, mechanic and coffee-maker, united by the fact that Britt’s dad never praised or acknowledged either of them. They decide on a posthumous revenge of sorts and in the dark of night they cut the head off James’ statue. While doing this they manage to save a couple from being mugged and when they get home they find themselves on TV, not for saving the couple but for vandalising the statue.

In an unusual flash of creativity, Britt decides that maybe by pretending to be baddies they can in a backhanded way become heroes. Thus they create roles for themselves as ‘The Green Hornet’ and his faithful sidekick. They are assisted (at first unknowingly) by Britt’s newly appointed secretary Lenore Case (Cameron Diaz).

Death of a parent; crime; superheroes

There is frequent, and often intense, violence, sometimes played for comedy. Examples include:

Children in this age group are likely to be disturbed by a number of the violent scenes and the bullying of the younger James by his father as seen in flashback scenes.

There is product placement including:

The Green Hornet is an action adventure based on characters who have been seen in various comics, films and television programs since the 1930s.  Unlike characters like Superman, these superheroes are ordinary people who have access to extraordinary technology. The film is likely to interest fans of earlier versions, and teenage boys and young adults attracted by the superhero theme. It is definitely too violent for primary school-aged children and younger teens.