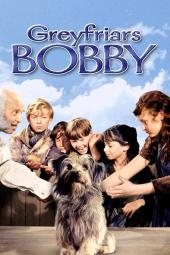 Parental guidance under 6 (themes, some mildly scary scenes and possible lack of interest)

Set in 1865, this Disney version of Greyfriars Bobby is based on the story of a faithful Skye terrier who, it is said, sat on his master's grave for 14years until he died himself. Bobby didn't actually belong to Auld Jock (Alex Mackenzie), but he thought he did. When Jock returns to Edinburgh from Gauldbrae Farm he leaves Bobby behind with a local family – but Bobby walks over 8 miles to follow his master, eventually finding Jock collapsed on the street. Jock wakes up and takes Bobby to an old lodging house where, unfortunately, he dies of pneumonia.

Bobby follows the coffin to Greyfriars kirkyard, the graveyard surrounding Greyfriars Church, and there he stays. He's looked after and fed by the kindly local publican, John Trail (Laurence Naismith), and the local children. Bobby gets into trouble, however, with the nightwatchman, James Brown (Donald Crisp), who repeatedly tries to move Bobby out as dogs are not permitted in the churchyard. However, Mrs Brown (Freda Jackson) takes pity on Bobby and finally persuades her husband to allow him to stay. John Trail and James Brown end up getting into an argument about who owns Bobby and who should pay for his licence. Eventually, the Lord Provost of Edinburgh (Andrew Cruickshank) gives Bobby a collar and keys to the city allowing him to roam freely. A statue to Bobby remains to this day.

Abandonment of a pet; Loyalty of animals.

Greyfriars Bobby is a charming family Disney classic, loosely based on the story of Greyfriars Bobby. Filmed in 1961, it is now quite dated and the dialect may be difficult for young children to follow. Younger children may also lose interest fairly quickly, therefore, it is not recommended for those under 6 years of age. However, the film does hold some enduring charm and good messages for older children who are able to watch it through.

The main message from this movie is that dogs are extremely loyal and faithful pets.