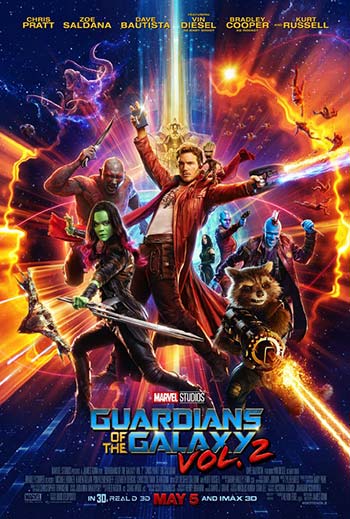 Not suitable for children under 13, parental guidance to 15 (Sci-fi action and violence, sexual references, coarse language and fantasy themes)

Guardians of the Galaxy Vol. 2 begins with a flashback to 1980 where a young man and woman, obviously in love, are driving along the open road. The man and woman are then seen standing in a forest with the man holding an alien device emitting tendrils of light and energy. The man places the device on the floor of the forest and the tendrils of light and energy appear to grow into the ground like tree roots.

The film fast forwards thirty odd years to find the Guardians of the Galaxy including Peter Quill/Star Lord (Chris Pratt), Gamora (Zoe Salana), Drax (Dave Bautista), Rocket (voice of Bradley Cooper) and Baby Groot (voice of Vin Diesel) guarding precious power batteries for a race of golden aliens called the Sovereign. The Guardians have it on good authority that an inter-dimensional, energy-sucking beast will attempt to steal the Sovereign’s batteries. When the beast comes through the dimensional portal therefore, the Guardians are waiting and a ferocious battle erupts. The Guardians manage to defeat the beast, but Rocket, unbeknown to his friends, steals the very batteries the Guardians were meant to protect. This results in the full wrath of the Sovereign coming down on the heads of the Guardians. Just as the Sovereign are about to annihilate the Guardians, an unknown ship appears and attacks the Sovereign, destroying all their ships. The Guardians’ rescuer is Peter’s long lost father Ego (Kurt Russel), a celestial being who has been searching for Peter. Ego wants to take Peter to his home, a planet entirely of his own making.

At this point the film’s story splits into several directions with some Guardians travelling with Peter while others stay behind to undertake their own adventures involving their old friend Yondu (Michael Rooker). On Ego’s planet Peter and his friends meet a mysterious female alien named Mantis (Pom Klementieff), who has empathic powers. However, all is not as it appears and the Guardians are once again called upon to step up and save the lives of every being in the galaxy.

Guardians of the Galaxy Vol. 2 contains extended sequences of intense sci-fi action, violence and peril throughout, including: gun and hand weapon related violence, the depiction of multiple/mass violent alien deaths/murders and injuries, and the occasional depiction of alien blood and gore. It also includes occasional comical and slapstick style violence.

The film contains a wide variety of humanoid alien characters who are very scary looking including:

The film contains a number of covert and overt sexual references throughout. Examples include:

The film contains some medium level coarse language and name calling scattered throughout. Examples include:

The film Guardians of the Galaxy Vol.2 rated (M) is a sci-fi, action, adventure film that targets adolescents, adults and fans of Marvel Comics. The film contains some classic tracks from the 1970’s as well as lots of action and stunning CGI. Vol. 2 spends more time on character development than Vol. 1 with each of the film’s main characters given their own storyline within the film’s main story. However, this does result in moving between many stories, which requires the viewer’s full attention. In general, like Vol. 1, Vol. 2 should easily entertain its intended audience.