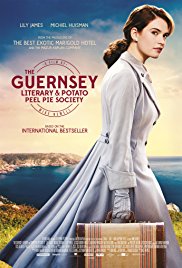 Not recommended under 12, parental guidance 12-13, due to war/adult themes and disturbing scenes

In 1941, the island of Guernsey is under German occupation. The residents are living under severe deprivation as the soldiers take all their animals and food supplies, leaving them with very little. One night Amelia Maugery (Penelope Wilton) hosts a group of friends for a secret dinner. On the way home they are stopped by German soldiers for being out after curfew and, on the spot, Elizabeth (Jessica Brown Findlay) invents the ‘Guernsey Literary and Potato Peel Pie Society’ as their reason for being out. Thus begins their reading group and they continue to meet on a regular basis.

After the war, one of the group members, Dawsey (Michiel Huisman), sends a letter to an English author named Juliet Ashton (Lily James) asking for her help in obtaining a particular book. Dawsey and Juliet become good pen pals and she becomes increasingly intrigued by life on the island. She decides to write an article about Guernsey during the war for the Times and sets off to research the topic, leaving her new fiancé Mark (Glen Powell) back in England.

Juliet is unprepared for the stories of heroism and loss of life that she hears, and that deeply move her. She becomes quite enmeshed in the lives of the Guernsey residents and in particular, Dawsey and Kit (Florence Keen), Elizabeth’s young daughter who was left behind when her mother was arrested and sent to Germany.

World War 11; loss of, and separation from, parents; loss of children

There is some coarse language in this movie, including infrequent use of the following words:

The Guernsey Literary and Potato Peel Pie Society is a romantic drama set in the beautiful location of Guernsey. Although it was a dreadful period in history, the story is told with great compassion and celebrates the acts of heroism and self-sacrifice which were evident during the German occupation. Due to its themes, and some disturbing scenes, the film is most suited to older adolescents and adults and is therefore not recommended for children under 12, with parental guidance recommended for 12 and 13 year olds.

The main messages from this movie are to care for other human beings, even if that places your own life in jeopardy, and that courage and humanity can rise above evil.