Guess How Much I Love You - Christmas in July Special 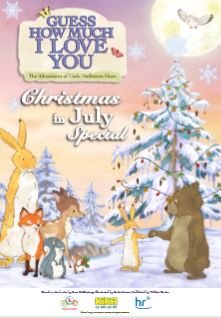 Recommended for early childhood. May lack interest for children over the age of 8.

The film is comprised of three episodes detailing the adventures of Little Nutbrown Hare (voice of Matthew Jacob Wayne) and his friends. In the first episode, Christmas to the Moon and Back, Little Nutbrown Hare and his friends Little Fieldmouse (voice of Allie Carlton), and Little Grey Squirrel (voice of Stuart Allen) are helping collect food for a Christmas feast. When most of their food is accidentally washed down river the friends set off to retrieve it and come across a lost bear cub searching for his mother. While helping the bear cub the friends lose their way in a snowstorm and learn that the most important part of Christmas is not the food or the decorations but having people you love to share it with. In the second episode, The Holly Branch, Little Nutbrown Hare discovers that someone has left him the gift of a holly branch. While trying to discover who left the branch, he locates the bush itself and with a little help from his friends decides to give the same gift, and bring the same joy, to all the animals in the meadow. In the final episode, Feast Day, Little Nutbrown Hare and his friends struggle to find the perfect spot and enough food for a wonderful feast day. When they finally bring everything together, they realise they have just enough food and their chosen spot turns out to be the perfect place. Ultimately, what makes the evening so special is not about having enough to eat and beautiful Northern Lights to watch but that they have friends and family to enjoy it with.

Separation from parent, neighbours helping each other, spreading joy to others.

Guess How Much I Love You - Christmas in July Special is an animated series of stories aimed at early childhood viewers.

The main messages from this movie are to help others, to share what you have, to see the best in every situation and to spread kindness and love wherever you go.