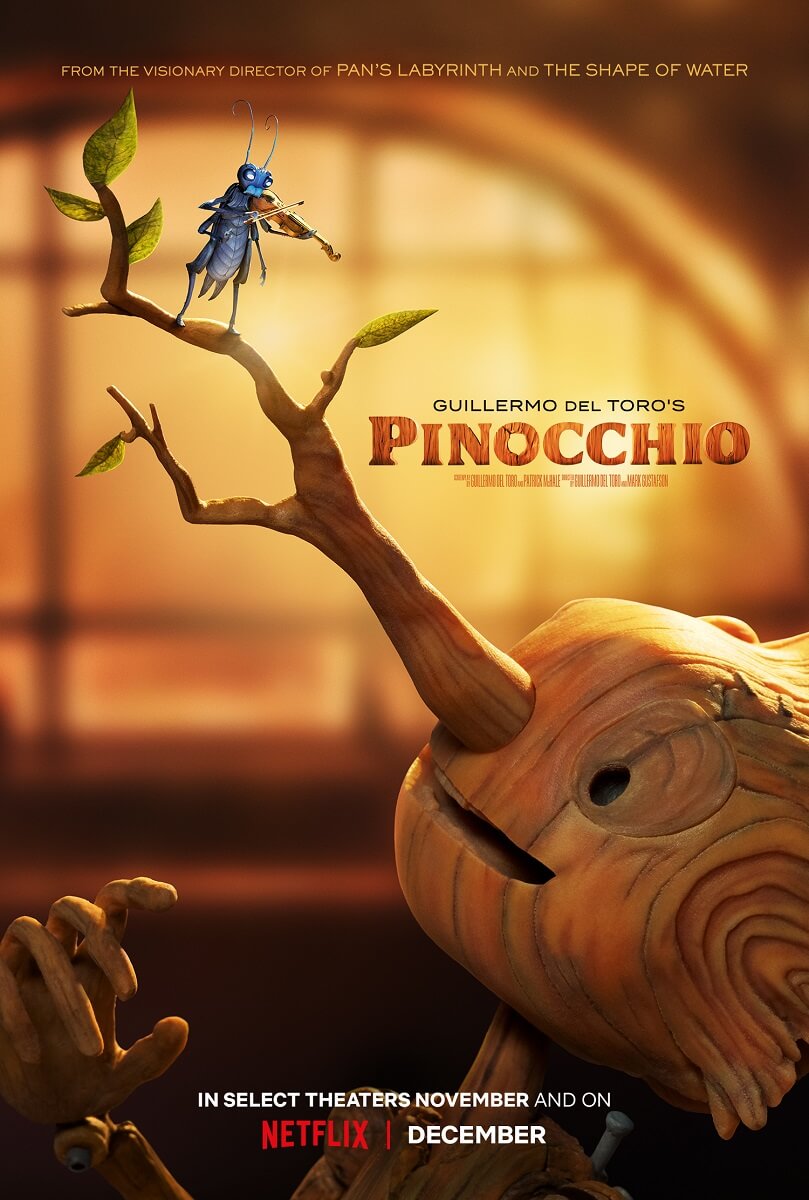 Not suitable under 10; not recommended under 12; parental guidance to 14 (violence, scary scenes)

Set at the start of World War II in Mussolini’s Italy, Guillermo del Toro’s Pinocchio is a retelling of the classic story of Pinocchio by Carlo Collodi. The tale is told by Sebastian J. Cricket (voice of Ewan McGregor) at a time when fascism is on the rise and the local town where Geppetto (David Bradley), a carpenter, lives with his son, Carlo, is ruled by the Podestà (Ron Perlman), a loyal Nazi. Tragedy occurs when the church that Carlo is in, is hit by a bomb and he is killed. Geppetto never recovers from the loss of his son and lives his life in grief and in a drunken state.

Many years later, Geppetto carves out a wooden boy from a tree that grew next to Carlo’s grave. A wood sprite (Tilda Swinton) takes pity on Geppetto when she sees him still weeping over Carlo’s grave, and gives life to the wooden boy. Geppetto calls him Pinocchio and is both afraid and joyful when Pinocchio comes to life. Pinocchio, however, is full of mischief, curiosity and disobedience, unlike Carlo who was always an obedient boy. Pinocchio’s nose also grows longer if he tells a lie, which makes Geppetto angry. The Podestà wants Pinocchio to join the Nazi Youth Party and learn how to become a soldier. Instead, Pinocchio joins a touring carnival led by the wicked Count Volpe (Christopher Waltz) and his cat, Spazzatura (Cate Blanchett). Pinocchio is accidentally killed when a vehicle runs him over and he finds himself in a dark place where black rabbits are playing cards. The wood sprite’s sister, Death, tells Pinocchio that he has many lives to live and sends him back to Geppetto.

On his return to life, Pinocchio is sent to the Nazi Youth camp where he befriends the Podestà’s son, Candlewick (Finn Wolfhard), who had previously tormented him. There, both boys learn invaluable lessons about questioning authority. When the camp is destroyed by enemy bombing, Pinocchio continues his adventures to rescue Geppetto who has been swallowed by a gigantic whale. In order to save his papa, Pinocchio has to do something most courageous.

Guillermo del Toro’s Pinocchio is a stop-motion animated, musical fantasy that is amazing to see. It is beautifully crafted and visually stunning. The film focuses on many philosophical subjects, including father-son relationships; life, death and immortality; and war and its consequences, and as such is too intense for younger viewers. It is also quite scary and violent in places and is therefore not recommended for children under 12 and parental guidance is recommended for children aged 12 – 14.

The main messages from this movie are that sometimes it’s necessary to disobey those in authority; and that trying your best is the best anyone can do.