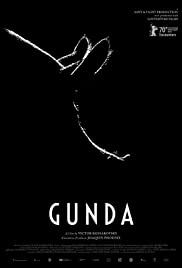 This documentary gives viewers an intimate glimpse into the lives of a sow (Gunda) and her newly born piglets as they go about their lives in the barnyard, until the time comes for the piglets to be taken away. Also featured are a bunch of chickens, including a one legged hen, and a herd of cows. The film is shown from the animals’ perspective and contains no human interaction or talking. Viewers are simply invited to watch the animals, to sit in their presence and to learn to see the world through their eyes.

Baby piglets being separated from their mother; the way humans use and define animals. Though not shown or discussed, the concept of the slaughterhouse lingers in the background.

Gunda is a wordless documentary that invites audiences to establish a connection with the livestock featured in the film and to perhaps begin to see them, and all animals for that matter, as something more sacred and more valuable than just meat. The cinematography is exquisite, and the lighting and camera angles help capture the individuality and charm of the characters. While the film is suitable for most audiences, it will be best enjoyed by adults and older children who are able to see the deeper messages contained throughout and who have the patience to sit and watch a largely silent film. Younger children are likely to enjoy the film, though may appreciate it in shorter bursts.

The main messages from this movie are that animals are much more than just food and that humans should take the time to slow down, to see the worth of those we share our planet with and to reflect upon our relationship with other incredible creatures.