H is for Happiness 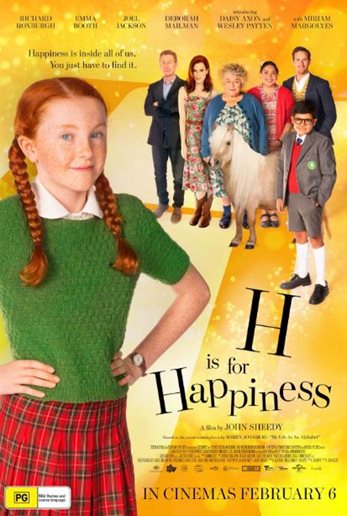 Not suitable under 10; parental guidance to 13 (adult themes, distressing scenes)

Candice Phee (Daisy Axon) is a bright, articulate, order-loving 12-year-old, who’s love for reading the dictionary and asking too many questions in class has left her without any real friends. That is, until new student Douglas Benson (Wesley Patten) lets Candice in on his big secret – He’s from another dimension and is hatching a plan to return there by jumping out of the highest tree he can find. While the two friends work on Douglas’ interdimensional escape plan, Candice tries to stitch her family back together after the death of her infant sister left her mother (Emma Booth) depressed and bed-ridden, and a failed business relationship tore her father (Richard Roxburgh) and uncle (Joel Jackson) apart. Exploring themes of grief, family breakdown, first love, and being “normal”, H is for Happiness is a coming of age story that explores adult problems through the eyes of a 12-year-old girl, who just wants everyone to be happy.

H is for Happiness is a bright and fantastical film based on the children’s novel, My Life as an Alphabet, that depicts the struggles of adults through the eyes of an odd but bright 12-year-old girl. While comedic moments exist throughout the film, the dramatic ones are far more prevalent, contrasted by sweet performances by the younger cast members, and the colourful set design. This film will likely best entertain children between 10 and 13, however, parental guidance is recommended due to the distressing themes in the film (death; family breakdown; depression).

The main message from this movie is to be kind and caring towards each other because you never know what others are dealing with.