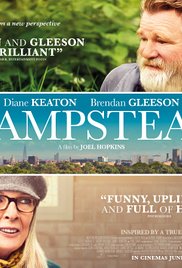 Hampstead is based on a true story. Donald Horner (Brendan Gleeson), a proud Irishman, chooses to live a simple life in a shack he built himself on Hampstead Heath. Donald is his ‘own man’, growing the food he needs and generating his own electricity. However, developers have submitted a plan to knock down an old hospital to build luxury apartments and they need to evict Donald whose shack is close by. As it happens Emily Walters (Diane Keaton), an American widow, is looking through binoculars from her attic window one day when she sees Donald being attacked by two young men. She immediately calls the police and saves Donald’s life.

Emily is intrigued by Donald and, although initially reticent, the two slowly build up a close relationship. Much to Donald’s dismay, Emily employs the help of a local social activist (Hugh Skinner) to plead his case and when a group of activists set up camp on the Heath, Donald angrily sends them away.

After much persistence on Emily’s part, Donald eventually accepts her offer to hire a lawyer to fight his battle in court. He goes on to win his case and is given title to his home and land.

Conservation versus development; being self-sufficient

Nothing apart from the above-mentioned violent scenes

Nothing apart from the above-mentioned violent scenes

Donald talks about his former partner who died of cancer. She told him to leave her as he wasn’t handling it well (she was older than him) and he did. He felt remorse for this.

There is some social drinking on several occasions - at parties, with dinner, etc.

Hampstead is a romantic drama with light comical moments, wonderfully portrayed in British comedy style. The scenery of Hampstead Heath is beautiful and it is uplifting to see a ‘David’ take on a ‘Goliath’ and win the day. While there is nothing particularly scary or violent in this movie, it is more suited to teens and adults due to its themes.

The main messages from this movie are to stand up and fight for what you believe, and that the simple things in life give more pleasure than lots of money.