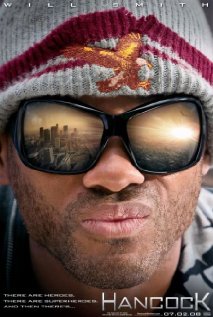 Hancock (Will Smith) is a superhero, who is immortal, indestructible and can fly, but has no idea of who he really is, or where his powers came from. All he remembers is that he woke up in hospital 80 years ago with amnesia and superhero powers. Hancock is also his own worst enemy. He is foul mouthed, drinks himself into oblivion and, through his recklessness, causes more damage than good. Then one day, Hancock saves the life of Ray Embrey (Jason Bateman), a public relations executive who, in return for the good deed, decides to become Hancock’s personal public relations officer and transform his “bad-boy” image.
Hancock’s new image is a great success, and Hancock spends time with Ray, Ray’s wife Mary (Charlize Theron) and their son Aaron (Jae Head). There appears to be a mysterious familiarity or attraction between Mary and Hancock and the situation is brought to a head one evening when Hancock tries to kiss Mary. She responds by throwing Hancock through the side of the house and into the street, thus revealing her own superhero powers.

Hancock contains action violence throughout together with some threats and intimidation.  Examples include:

Hancock contains some partial nudity and sexual activity. Examples include:

Hancock depicts frequent alcohol use and abuse. Examples include:

Hancock rated (M) is a superhero movie with a difference which may entertain older adolescents and adults with its special effects and an attention-grabbing plot twist. The main messages from this movie are that abilities, both of superheroes and ordinary people, should be used to the benefit of society.

This movie could also give parents the opportunity to discuss with their children attitudes and behaviours, and their real-life consequences, such as Hancock’s early behaviour and his transformation during the film.