Hannah Montana and Miley Cyrus: Best of Both Worlds Concert (in 3D) 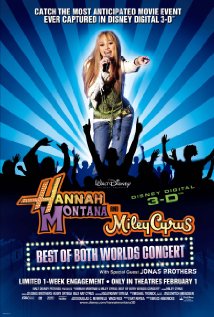 Hannah Montana and Miley Cyrus: Best of Both Worlds Concert is essentially a filmed concert of a young performer, Miley, interspersed with documentary style interviews and behind-the-scenes footage.  It is filmed entirely in 3D. Miley initially appears as her television alter-ego, Hannah Montana then, after handing over to her support act, the Jonas Brothers, returns to the stage as herself.

The world of a young celebrity and her fans

Hannah Montana/Miley Cyrus: Best of Both Worlds Concert is a non-fiction film featuring a concert plus documentary footage.  It is unique in that it is filmed in 3D, requiring viewers to wear supplied 3D spectacles.

Some parents may wish to discuss with their children the importance of having a role model to aspire to without the need to replicate their image.  Many of the children attending the concert were quite young but already wearing make-up, wigs and fashionable clothing like Hannah/Miley.

Parents might also wish to reinforce travel safety in vehicles, as Miley and her father, Billy Ray Cyrus, are seen travelling to the rehearsal studio in the back seat of a car without wearing seat belts.