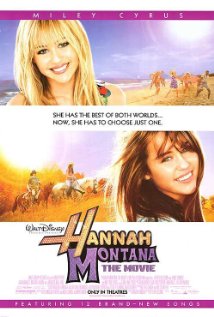 Not suitable under 5, parental guidance to 5-7 (Scenes of fighting and accidental harm)

Hannah Montana: The Movie explores a fictionalised account of the conflicting roles faced by child star “Hannah Montana”/Miley Stewart (Miley Cyrus).  This lightweight musical-comedy centres around Miley’s enforced retreat from Los Angeles to spend some time with her grandmother, Ruby (Margo Martindale), who lives in rural Tennessee.  Miley’s father, Robbie Ray (played by her real-life father Billy Ray Cyrus) insists that the family goes for this brief holiday after noting the arrogant, self-centred attitudes his daughter is developing in her life as a musical celebrity.
At first, Miley protests vehemently and has difficulty shedding her Hollywood image and adjusting to the slow pace of life in Crowley Meadows.  While there, however, she has the opportunity to reflect on her notions of self and others and eventually begins to develop more meaningful relationships with those around her.  Such friendships, however, are made difficult by her need to keep her superstar identity as “Hannah” a secret.  Toward the end of her holiday, Miley attends a fundraising event aimed at raising capital to save Crowley Meadows from greedy shopping-mall developers.  During the evening, farmhand Travis (Lucas Till), with whom Miley has become smitten, suggests (over the P.A. system) that she ask her “friend” Hannah Montana to become involved in the town’s struggle for independence.  This leads to an ultimately unsuccessful attempt by Miley to simultaneously play the role of both Miley Stewart and celebrity Hannah Montana.

Violence is minimal, although there are a number of incidents of cartoon-like accidental harm.  These include:

Apart from the scenes of accidental harm described above, children in this age group are unlikely to be disturbed by anything in this film.

Apart from the scenes of accidental harm described above, children in this age group are unlikely to be disturbed by anything in this film.

This film is a vehicle to promote Hannah Montana merchandise, CDs and DVDs.

There is no nudity or sexual activity in this movie, however, there is one scene where an escaped pet ferret runs up the Mayor’s trousers, which he promptly drops, revealing oversized boxer shorts.

Hannah Montana: The Movie is a lightweight musical comedy which unashamedly promotes Hannah Montana music, DVDs and merchandise.
The intended message of this film is confusing.  On the one hand, Miley’s struggle with her dual identity seems to suggest that audiences should have the courage to be themselves.  However, on the other hand, the final scenes of the movie seem to promote an entirely different point of view.  At the end of the film, after Miley breaks down on stage and tells her fans that she can no longer keep up the façade of being a superstar, the crowds begin chanting that they want her to resume her identity as “Hannah”.   Following a brief period of deliberation, Miley puts her blonde wig back on and continues the concert, and then the film ends.
Values in this movie that parents may wish to reinforce with their children include: