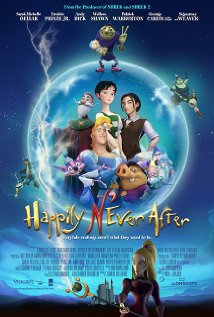 Fairytale Land is controlled by a Wizard (voice of George Carlin) who controls the scales of good and evil and makes sure that fairytales end happily ever after. He is assisted in this task by two helpers called Munk (voice of Wallace Shawn) and Mambo (voice of Andy Dick). When the Wizard goes on holiday, he leaves his assistants in charge and all goes badly.
Frieda (voice of Sigourney Weaver), the evil stepmother of Ella a.k.a. Cinderella (voice of Sarah Michelle Gellar) gets hold of the Wizard’s magic staff and proceeds to turn Fairytale Land upside down, so that all the happy endings become unhappy and the bad characters win and come to the castle to party and create chaos.
Ella is in love with the handsome prince but his servant, Rick, is secretly in love with Ella. He sees the battle to restore order as a way to prove himself and win Ella. Ella, however, believes that only the prince can save them. Through the course of their adventure she learns that you don’t need to wait for a hero, you need to believe in yourself and your friends.

Happily N’Ever After is an animated adventure comedy featuring many familiar fairytale characters. The message of this movie is that life is an adventure and that just living ‘happily ever after’ is really quite boring. Also that rather than waiting for a hero to come along and save you, you should believe in yourself and take action.

Values that parents may wish to reinforce with their children include:Trust your friendships

This movie could also give parents the opportunity to discuss with their children the importance of being responsible and taking your job seriously, and what happens when you don’t.