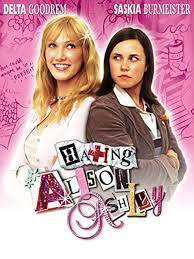 Not recommended under 8s, PG to 13 (Themes; Coarse language)

This film is the narrated story of Erica Yurkin (Saskia Burmeister), an unhappy, high school, hypochondriac who is struggling to develop her dream of becoming a famous actress, which she believes will open the door to a perfect world where poverty and crime do not exist, where everything is beautiful and always as it should be. This dream is the exact opposite of her current home life, where her absentee father wants nothing to do with the family, her mother has fallen for a toothless truck driver, her brother roams the neighbourhood in his underpants making crop circles in their front yard, and her younger sister has spent the last seven years thinking that she is a horse.

It is Erica’s dream of creating a better life for herself that helps her get through her days at Barringa High, a rough school filled with fighting and graffiti and out of control students, including Barry (Alexander Cappelli). The teachers at the school have repeatedly been institutionalised or run off to join the Hari Krishnas. Erica couldn’t be happier when Miss Belmont (Jean Kittson) arrives to whip the students into shape, as she is finally getting the attention she feels she deserves. Then Alison Ashley (Delta Goodrem) arrives. Alison is beautiful, wealthy, smart and appears to have the perfect life. Slowly Erica turns from wanting to be a friend to being bitterly jealous of everything that Alison has. The girls have a rough relationship until Erica begins to learn that she has more than she thought she did and that the “perfect life” is not always as perfect as it may appear.

The film contains a fair amount of violence:

Apart from the above-mentioned scenes, there is one other scene that may potentially frighten younger children. Erica’s younger sister is nibbling grass along the street as she crawls home pretending to be a horse. Erica grows impatient and leaves her to come home on her own. Barry watches Erica leave and then approaches the little girl in a threatening manner. The child later arrives back at home shaken and crying, saying that Barry has ripped off her tail.

The film contains a number of sexual references.

While the film doesn’t contain any sexual activity there is some partial nudity:

There is some substance use, including:

The film contains a small amount of course language and a lot of name calling.

Based on Robin Klein’s hilarious book of the same name, Hating Alison Ashley, the movie, falls somewhat short, while still being mildly amusing.

The movie’s main message is that those who appear to have it all may not have the most important things and that a simple act of kindness can open the doors of understanding and can even turn an enemy into a friend.

Some issues and values that parents may wish to discuss with their children are: friendship, jealousy, the role of family, truthfulness and the importance of believing in yourself.