He named me Malala 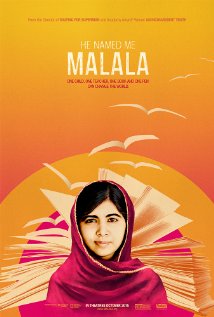 He named me Malala is a documentary about the life of Nobel Prize winning human rights activist Malala Yousafzai. The brave teenager was shot and seriously injured by the Taliban in Pakistan for speaking up about the right of girls to attend school. The film discusses Malala’s life leading up to her shooting in 2012 and follows her current life in England. The documentary discusses the political situation in Pakistan and explores the human right to education.

War; death; children as victims; the rights of women under the rule of the Taliban; recovering from serious injury

Children in this age group are also likely to be disturbed by the above-mentioned scenes and also:

He named me Malala is a touching and inspiring documentary which reinforces the importance of education, and of standing up for your own beliefs and for human rights. The subject matter and some scenes may be disturbing for younger children, so the film is not recommended for under 13s and parental guidance is recommended for 13 and 14 year olds. Given Malala’s age, the film raises important issues for parents and teachers to discuss with older children and presents an inspiring role model for girls in particular.