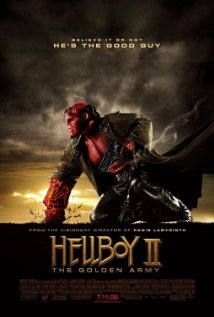 Not suitable under 12, PG to 15 (Violence, disturbing scenes and themes)

Hellboy II begins with a flashback to the Christmas of 1955, where we see a twelve-year-old Hellboy being told a bedtime story by his adoptive father Professor Trevor Bruttenholm (John Hurt). The story tells of a war between humans and mythical creatures such as Elves and Goblins. In an effort to defeat the humans, a Goblin devised and built an army of indestructible golden robot-like warriors, which were controlled by a golden crown worn by Balor (Roy Dotrice) King of the Elves. Balor was so appalled by the destruction inflicted upon the humans by the Golden Army that he forged a truce with the humans; the humans would keep to the cities and non-humans to the forests. The King’s son Prince Nuada (Luke Goss) did not agree with the truce and went into exile and to prevent the Golden Army from ever rising again, the golden crown was broken into three pieces with one piece kept by King Balor, one piece given to the humans, one piece given to Princes Nuala (Anna Walton), Prince Nuada’s twin sister.
The film cuts to present day where Prince Nuada has returned from exile with the intent of reclaiming the golden crown and awakening the Golden Army. To reclaim the piece held by the humans, Prince Nuada raids an auction house with an army of “Tooth Fairies”, killing all present, and then kills his father the King to reclaim the second piece, while Princess Nuala escapes with the third piece.
The Bureau of Paranormal Research and Defense (BPRD) is determined to track down those responsible for the attack on the auction house. Hellboy, also known as Red (Ron Perlman), his girlfriend Liz (Selma Blair), Abe Sapien (Doug Jones) a psychic fishman, and Johann Krauss (voice of Seth MacFarlane) a “special agent” who exists in a containment suit as gaseous ectoplasm, join forces to find Prince Nuada while Princess Nuala is taken to BPRD headquarters for protection. When Prince Nuada attacks BPRD headquarters, kidnaps his sister, finds out the location of the Golden Army and wounds Hellboy with a magical spear, the battle begins in earnest.

The supernatural; destruction of the human species

Hellboy II is full of mythical creatures and beasts specifically designed to have a scary appearance. In addition to the above-mentioned violent scenes, there are a number of scenes and images in this movie that could scare or disturb children under the age of five, including the following:

Children in this age group are also likely to be disturbed by scenes described above.

Children in this age group are also likely to be disturbed by scenes described above.

Most children in this age group should be able to cope with the scenes described above.

The film contained some product placement. Examples include.

Hellboy II - The Golden Army the sequel to the 2004 film Hellboy, is an action fantasy adventure targeted at older adolescents and adults. The film depicts a world full of magic, fantasy and horror with many supernatural and demonic creatures. Hellboy is a reluctant hero who often feels like an unwanted freak and is judged by the public by his appearance rather than what he does.

This movie could also give parents the opportunity to discuss with older children attitudes and behaviours, and their real-life consequences, such as.