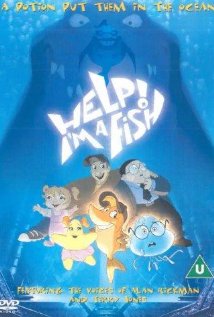 Bud and Stella have to be baby-sat by their rather large Aunt, thwarting Bud’s plans to go fishing. Cousin Chuck also comes along and while Bud teases him about the computer program he is using, his Aunt falls asleep reading to Stella. Bud sees this as his chance to escape with Stella to go fishing and they take a reluctant Chuck along with them. Unfortunately the trio become stranded on a rock when the tide comes in and it seems as though they will be washed away when they discover a door which opens into the rock. Inside they find a nutty professor in his laboratory where he is creating a potion that will enable people to live underwater like fishes do.

Stella is thirsty and unknowingly drinks the potion. She turns into a starfish and is thrown into the ocean by Bud before he realises it is Stella. Bud then drinks the potion so that he can go into the ocean and rescue Stella. They enter an underwater realm that is ruled by a large shark. Meanwhile the Professor and Chuck head out in a boat with the antidote to try to find Bud and Stella. A storm comes up and they both get washed into the ocean along with the antidote. This is discovered by Joe, a fish that had previously survived by cleaning the shark’s teeth, but is now able to talk and become powerful. The shark also drinks some of the antidote and he is also able to talk but doesn’t have the intelligence of Joe. Joe turns into a despotic ruler who has plans to create a society of “exceptional, intelligent fish”.

Bud and Stella are joined by Chuck who has become a jellyfish. The trio are seen as a threat by Joe who imprisons them. They only have a limited time to drink the antidote before they will remain as fish forever. They are caught and escape several times and are left with only minutes to spare to find the antidote.

There is some violence, some of it slapstick, including the following:

Children under five would find the above scenes scary and would be upset by Sasha being hit with a whip. Other scary scenes in this movie include:

Children in this age group are also likely to find the scenes described above scary or disturbing.

Most children in this age group would understand this is only fantasy.

Children over the age of thirteen are unlikely to have difficulties with the scary material in this film.

There is no drug or alcohol use but there is the drinking of the potion that transforms people into fish and back again.

The take home message is that power corrupts evil people; however, this message probably goes way over the head of young children.