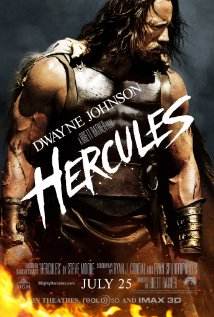 The film opens with a montage of scenes and images depicting the trials and tribulations of Hercules from birth to adulthood. We learn that Hercules (Dwayne Johnson) is a demigod and the son of Zeus, King of the Gods, and that as a type of retribution, Hercules was given 12 arduous tasks to complete. He is now suffering ongoing despair over the death of his wife and children and has joined with several others to become a mercenary.

Following the film’s opening montage we find Hercules and his warrior companions in a village inn. Hercules’ companions include a mystical seer named Amphiaraus (Ian McShane), Hercules’ lifelong friend Autolycus (Rufus Sewell), Atalanta (Ingrid Bolso Berdal) an Amazon warrior, an axe wielding mute named Tydeus (Aksel Hennie), and Hercules’ nephew Iolaus (Reece Ritchie). Their relaxation is cut short when a beautiful and mysterious woman walks into the inn and pleads for Hercules’ help. The woman is Ergenia (Rebecca Ferguson).  Her father Lord Cotys (John Hurt) is being threatened by an army of demons and Ergenia offers Hercules his weight in gold to help her father defeat the demon army.  Hercules accepts Ergenia’s offer and sets off with his band of followers.

After defeating the demon armies harassing Lord Cotys’ villagers, Hercules discovers that all is not as it appears. He decides to stay around and find out what is really going on, a decision that leads to more trouble for him.

The film  contains action violence, multiple deaths, and graphic images of blood and gore. Examples include:

Hercules is a fantasy action adventure targeting older adolescents and adult fans of such films. The film has some entertaining comic relief and gives a new twist on an otherwise predictable story by depicting Hercules as a mortal adventurer and opportunist rather than an immortal demigod. The film contains frequent violence with some disturbing images of death and blood, so is not suitable for children under 13 with parental guidance recommended for 13 to 15 year olds.