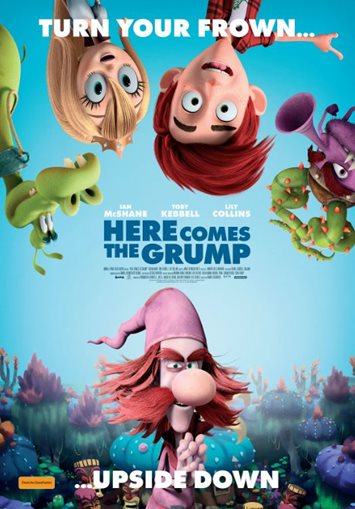 Not recommended under 7 due to themes and messages. Parental guidance to 10.

The Grin (Ian McShane) and his girlfriend Mary (Amy Thompson) arrive in the Kingdom of Groovingham with the world at their feet. He has just graduated with top honours from Wizard School and has accepted a position in the royal court from the King himself. The Grin wants to use his powers to bring happiness to everyone, however, his actions have unintended consequences and he and Mary soon find themselves on the run from the law. When Mary is secretly banished to another realm, believing she has left him, The Grin transforms into The Grump and is determined to use his powers to make everyone else as miserable as he is. While the tales of his doings spread terror throughout the realm and he is eventually captured and put in prison, he continues to hone his powers and hatch plans for revenge. Meanwhile, in an earth-like dimension, in order to bring happiness to others Mary has created an amusement park based on the world she left behind and the love story that was left unfinished. When Mary eventually dies her grandson, Terry (Toby Kebbell), takes over and struggles to keep the park going. When all hope seems lost Terry accidentally opens a portal to the other dimension and finds himself in the Kingdom of Groovingham where the King has recently passed away, his daughter, Princess Dawn (Lily Collins), is having her coronation and The Grump has just escaped from prison. Angry he has lost his chance for revenge on the King, The Grump decides he will curse the princess and the entire kingdom instead. When Terry arrives at the castle Princess Dawn thinks all her troubles are at an end as he is there to save her, but all Terry wants is to get back home. When the pair learn that an oracle holds the key to helping them both they set out together to find it, learning some lessons about love and happiness and letting go.

Death or separation from a loved one, the transformative power of magic and that romantic love is the foundation for happiness.

Here Comes the Grump is an animated fantasy that will appeal to younger audiences. Parents and mature viewers may struggle to enjoy the movie as the plot is jumpy, the animation simplistic and characters are somewhat questionable.

The main messages from this movie are that true love equates to happiness, that misery loves company and that sometimes in order to find what you are looking for you simply have to let it go.