Here We Are: Notes for Living on Planet Earth 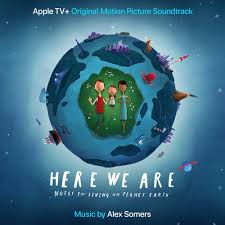 Parental guidance 4 and under; suitable for 5+ (some concepts and messages may need to be explained)

Here We Are: Notes for Living on Planet Earth is based on a story by Oliver Jeffers and narrated by Meryl Streep. Finn (voice of Jacob Tremblay) is a young boy filled with the joy of learning, having been encouraged by his Mum (voice of Ruth Negga) and Dad (voice of Chris O'Dowd) from an early age. Finn's favourite place is the Museum of Everything, however as it is Earth Day, his parents persuade Finn to go on a bike ride through Central Park.

Finn’s parents have difficulty engaging him in the wonders of nature and eventually Finn tricks them into going to the museum. There, Finn goes on a magical tour all around the planet. He sees the diversity of people and animals everywhere. He goes to the bottom of the ocean and up into outer space. Finn develops a new appreciation of everything that's around him and starts to see the trees, the butterflies and the beauty of nature.

Here We Are: Notes for Living on Planet Earth is an animated short film made for Earth Day. Especially made for young children, the film is gentle and educational and includes many good messages about conserving the Earth. Some of the messages might need some explanation to 4 year olds and under, thus parental guidance is recommended for this age group.

The main messages from this movie are that we all feel lost at times and we need to start with what we know, and to treat everyone with kindness and respect. Also, although there are 7 ½ billion people on the Earth, there would be enough for everyone if we all share.

This movie could also give parents the opportunity to discuss with their children the need to look after our planet and things we can all do to help, such as recycling and caring for our wildlife by protecting their natural habitats.