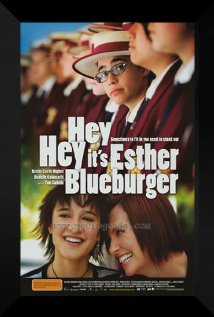 Not recommended under 13, PG to 15, adult themes, sexual references and substance use.

Esther Blueburger (Danielle Catanzariti) is a non-conformist thirteen year old, in a very conservative private girl’s school. She spends most of her free time alone, watching the other girls. On her way home from school one day, she stops to watch a rock band practising in a club and she befriends the drummer, a girl called Sunni (Keisha Castle-Hughes) Sunni is cool and hip but she takes a liking to Esther as she sees something different about her. Together they hatch a plot to get Esther to attend Sunni’s public school without telling Esther’s parents.

Esther ‘joins’ Sunni’s group, the ‘Lion-pits’ but finds she has to go to extreme lengths to prove that she fits in. Esther takes warmly to Sunni’s Mum, Mary (Toni Collette), who is more of a friend to Sunni than a mother, and works at night as a pole dancer. Esther sees the relationship as quite different to her own relationship with her mother Grace (Essie Davis) who is a career woman with little time for Esther.

As a Jewish girl, Esther has a combined bar/bat-mitzvah with her twin brother Jacob (Christian Byers). None of her private school friends attend, but much to Grace’s displeasure, Sunni turns up uninvited. At the ceremony, Esther’s Dad gives a speech in which he says he hopes that the twins will always land on the right side. Unfortunately this isn’t the case for Esther, as she manages to complicate her life considerably. However she learns many important life lessons along the road to finding her identity and where she fits in.

Hey Hey it’s Esther Blueburger is a coming of age comedy aimed at adolescents. It was filmed in South Australia. The film is a bit drawn out and some of the more unpleasant parts could have been omitted without losing anything from the movie.

The main message from this movie is that you don’t need to conform to gain acceptance.