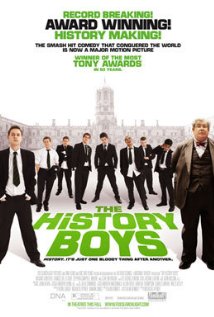 Based on the play by Alan Bennet and predominately supported by its original cast, The History Boys follows the path of eight high-school graduates who have all elected to do an extra term at school to improve their chances of getting into Oxford or Cambridge Universities. The Headmaster (Clive Merrison) is thrilled with the boys’ prospects and enlists the help of Irwin (Stephen Campbell Moore) a mysterious young teacher in the hopes of further improving their chances.
The boys are also guided by their devoted history teacher Dorothy Lintott (Frances de la Tour) and their creative general studies teacher Hector (Richard Griffiths) who has a disturbing tendency to fondle his students, something which they seem to regard with amusement.
As the boys prepare for their entrance exams they are encouraged to “think outside the box” and look for obscure and unusual perspectives. In the process Dakin (Dominic Cooper) and David Postner (Samuel Barnett) begin to look more closely at themselves and question their sexuality.
It takes a tragic turn of events for the boys to recognise some of the lessons that they had been taught and to realize how those lessons would impact not only their choices, but the rest of their lives

Children under five are likely to be disturbed by the above mentioned scenes.

Children under five are likely to be disturbed by the above mentioned scenes.

Apart from the violence described above, there are no scenes in this film that are likely to disturb children but children may be disturbed by the idea of a teacher sexually touching students and the way in which they react to this with amusement.

Apart from the violence described above, there are no scenes in this film that are likely to disturb children but children may be disturbed by the idea of a teacher sexually touching students and the way in which they react to this with amusement.

The History Boys is a. drama that contains many characteristics of a theatrical production. It will be favoured by fans of the original play and by, mature audiences.