Hobbit: The desolation of Smaug, The 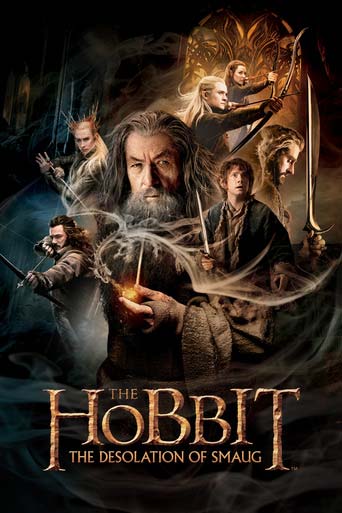 Not recommended under 13, PG to 15 (Violence; Disturbing scenes)

This is the second instalment of a three part adaptation of J.R.R. Tolkien’s The Hobbit. The film begins as a flashback with and the wizard Gandalf the Grey (Ian McKellen) convincing Thorin Oakenshield (Richard Armitage) to go on a quest to the Lonely Mountain and reclaim from the dragon Smaug a powerful gem called the Arkenstone.  This would enable Thorin to reclaim his heritage and reunite the dwarf people.

Twelve months later Bilbo Baggins (Martin Freeman), Gandalf, Thorin and Thorin’s company of twelve dwarves are being pursuit through the mountains by a pack of bloodthirsty orcs. In a bid to escape, the dwarves seek refuge in the abode of Beorn (Mikael Persbrandt), a skin changer who has the ability to transform into a gigantic bear. After gaining assistance from Beorn, the company continues on to Mirkwood forest where Gandalf leaves the group.

In Mirkwood forest Bilbo and the dwarves are first attacked by giant spiders and then captured by wood elves, who are led by Legolas (Orlando Bloom) and a female elf warrior named Tauriel (Evangeline Lilly). Bilbo and the dwarves are imprisoned by the elf king Thranduil (Lee Pace), but with the use of the One Ring Bilbo is able to free them and they escape down a raging river in wine barrels while being pursued by both elves and orcs.

The dwarves make their way to Laketown where they are befriended by a bowman named Bard (Luke Evans), who happens to be the descendant of the original Lord of Dale. With Bard’s assistance, Bilbo and the dwarves eventually make it to the Lonely Mountain where they gain access to the mountain through a secret door. However, when Bilbo attempts to steal the Arkenstone from Smaug the dragon (voice of Benedict Cumberbatch) things go terribly wrong.

The film contains intense fantasy action violence and peril throughout, including numerous decapitations, throat cuttings, impalements and stylised sword and knife fights. The violence is, however, less intense than in the Lord of the Rings trilogy with less depiction of blood and gore. Examples include:

In addition to the above-mentioned violent scenes, there are many scenes and characters in this movie that could scare or disturb children under the age of five, including the following:

Children in this age group will also be disturbed by the violent and scary scenes and characters described above and by:

No product placement in the film, but merchandise including clothing, video games, dolls and Lego toys is marketed to children.

The film contains a couple of covert sexual references. Examples include:

The film contains some occasional name calling which children may imitate. Examples include:

The Hobbit: Desolation of Smaug is a fantasy adventure film targeting older teens and fans of Tolkien’s books. It is the second film in the trilogy based on The Hobbit. The film goes beyond Tolkien’s original story, containing both characters and storyline not contained in the original book. It is 161 minutes long but easily entertains an older audience for this time.

While not as dark as the Lord of the Rings trilogy, the film does contain numerous scary scenes, characters and images, and extended scenes of intense violence, including decapitations and a battle with giant spiders. For this reason, it is not recommended for under 13s, even those who have read the book, and parental guidance is recommended for the 13-15 age group.

Values in this movie that parents may wish to reinforce with their children include courage and friendship.