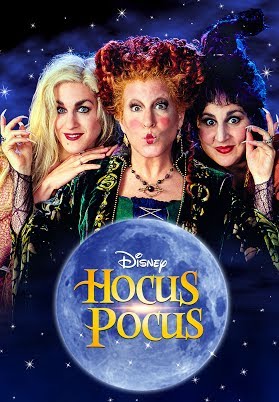 Not suitable under 8; parental guidance to 10 (violence, scary scenes, themes)

Winifred, (Bette Midler) Mary (Kathy Najimy) and Sarah (Sarah Jessica Parker) Sanderson are three witches living on the outskirts of Salem and surreptitiously sucking the life out of small children in an attempt to stay young forever. When little Emily (Amanda Shepherd) is lured to her death, her older brother, Thackery (Sean Murray), tries to save her but instead winds up being transformed by a curse into a black cat called Binx. Thakery’s family never knew what became of him and when the Sanderson sisters are publicly hung they take this secret to the grave but not before invoking one final spell that will allow them to come back to life. Binx spends the next three hundred years guarding the black flame candle that would allow them to return. On Halloween night in 1993, Max (Omri Katz), a newly arrived sceptic from California who doesn’t believe in witches or magic, takes his little sister, Dani (Thora Birch), out trick-or-treating. In an effort to spend time with his beautiful classmate, Allison (Vanessa Shaw), Max convinces her to take them to the old Sanderson cottage to try to make a believer out of him. While there, Max lights the candle and sets the witches free. Winifred, Mary and Sarah have until dawn to brew a potion and capture children to take their lives, or they themselves will be turned to dust. Max, Allison and Dani, with the help of Binx, must hide the witches spell book, thwart their plans and ultimately destroy the witches before they suck the life out of every child in Salem.

Hocus Pocus is a Halloween fantasy adventure that is best suited to tween audiences. Due to the violence and the constant threat to the lives of children this is not a film for younger viewers.

The main messages from this movie are to look out for those you love; and that by working together incredible obstacles can be overcome.