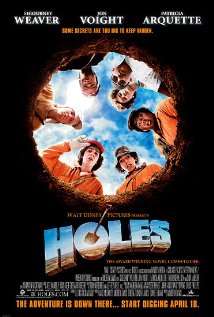 Stanley Yelnats is in the wrong place at the wrong time: a pair of runners apparently falls out of the sky into his hands. The shoes belong to Livingston, a famous basketballer, who had donated them to a charity auction. Stanley is caught by the police and sent to Camp Green Lake, a detention centre for troubled youth. Camp Green Lake is nothing like the name sounds – it’s in the middle of a desert with no water for miles around. The ‘inmates’ all have nicknames and they set out to intimidate and bully Stanley. Stanley befriends a young boy called Zero who won’t speak to anyone but talks to Stanley.  The boys spend their days digging holes in the hot sun ostensibly to ‘build their character’. Stanley believes he is there because of a curse imposed on his great, great, grandfather which brings bad luck to the family, although he says he doesn’t believe in the curse. The curse was put on him by a Madame Zeroni who turns out to be Zero’s great, great, grandmother.

The story is quite complex and frequently travels back and forwards in time. Green Lake was originally a thriving town with a large inland lake. The local white school teacher, Kate Barlow, fell in love with a black man, Sam, which was considered to be an unforgivable crime. Sam is shot and killed for this liaison and Kate becomes ‘Kissin’ Kate Barlow’ an outlaw thief and killer who leaves her identifying mark as a kiss on her victims. The lake dries up and it hasn’t rained there since that day.

The plot continues to weave and unfold and eventually it becomes clear why the boys are digging holes in the desert all day long. Zero, whose real name is Hector, escapes from the camp and Stanley goes out to find him. Together they unravel all the clues and manage to reverse the curse on both Stanley’s family and Green Lake.

There is quite a lot of pushing, shoving, intimidation and bullying at Camp Green Lake, as well as other violence in this film including the following scenes:

There are quite a few scary scenes in this movie. In addition to the above violent scenes, the following scenes would scare children in this age group:

Children in this age group may also be frightened or disturbed by the scenes mentioned above.

Some of the above scenes would scare children in this age group as the danger and violence is quite realistic.

Children in this age group should be able to cope with the level of violence in this movie.

Mr. Sir and Madame Zeroni smoke. There is some drinking of alcohol.

The take home message in this movie is that justice will eventually prevail and that good triumphs over evil.