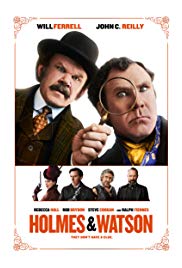 Not recommended under 13 (strong sexual references, drug use, coarse language, lack of interest)

Holmes & Watson is a comic spoof on the infamous stories of Sherlock Homes and his sidekick Watson. After foiling another plot by his archnemesis, Moriarty (Ralph Fiennes), detective Sherlock Holmes (Will Ferrell) and his wannabe co-detective, Dr John Watson (John C. Reilly), investigate a murder and plot to kill the Queen (Pam Ferris).  Whilst battling distractions from their sex-addicted housekeeper Mrs Hudson (Kelly Macdonald), and budding love from the beautiful and intelligent Dr Grace Hart (Rebecca Hall) and her odd companion Millie (Lauren Lapkus), it becomes clear to Holmes and Watson that the mystery may be more complicated than they originally thought.

Holmes & Watson is a lazy parody of the Sherlock Holmes detective mysteries. It very much misses the mark due to its outdated, crude, and often tasteless humour.  While only rated M, this film is inappropriate for children under 13, due to the strongly sexual humour, violent slapstick, and strong use of substances.  Parental guidance may be warranted for those under 15.  Unlike other Ferrell and Reilly comedies, this film is unlikely to entertain older children or adults.