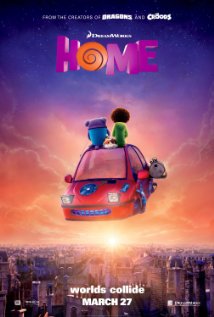 Parental guidance under 8 due to tense and scary scenes

Home is a story about an alien race that invades Earth, shipping human beings into a vacuum and relocating them to a desert planet millions of miles away. Under the leadership of Captain Smek (Steve Martin), the aliens known as the Boov plan to make Earth their new home, hiding from their mortal enemy in the process and believing that they are doing human beings a favour.

One of the small purple aliens named Oh (Jim Parsons) is someone who doesn’t quite fit in, and has actually been banished from his own people. During his solo adventures on Earth, he comes across a human girl named Tip (Rihanna) who evaded the relocation. When they first meet, both Oh and Tip present as outsiders of their own species. They are sceptical and distrustful, but both are willing to take a chance on each other.

Tip wishes to track down her mother after the disappearance of the humans, and Oh offers to help her. As time goes by, the pair realise that they have more in common than they once thought. Together, they attempt to save the world and eventually discover a new meaning of the concept of ‘home’.

Adventure and exploration; loss of a parent: friendship, love and relationships; identity and personal growth

There is very limited violence in the film but there are scenes that involve chase and evasion by a range of characters – these scenes are tense and dramatic and possibly scary for young children.

Some children may be scared by the aliens in the film but they are quite small and unimposing in appearance. They are not presented in a frightening way, despite being extra-terrestrial.

Children in this age group may be concerned about Tip’s feelings of loss at the disappearance of her mother after the Boov relocate all of humanity to another planet.

Home is an inspiring film about friendship and the gradual development of trust. It highlights the unfortunate nature of contemporary society where being different can cause a person to be isolated from others. However, the film also emphasises that there is strength in difference, and that the individuals who are willing to take a chance and to step outside their comfort zone are often the ones who enact positive changes. The film demonstrates that even the most unlikely of individuals can become close friends, as well as making clear that the nature of a ‘home’ is not a finite concept – home is a place where people feel that they are loved and cared about, and in turn, where they care for and love others.

There are some tense and scary scenes involving chase and evasion which may make the film disturbing for younger children, so parental guidance is recommended for children under 8.

The film raises some interesting issues that parents may wish to discuss with their children, such as: