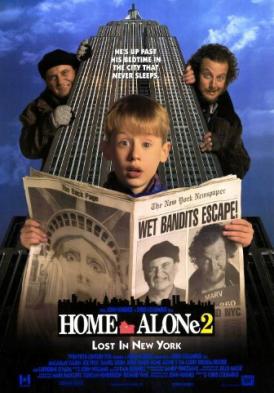 One year after Kevin (Macauly Culkin) was accidentally left home alone, the McCallisters get ready for another Christmas family holiday – this time they are bound for Florida. Just like the year before, everyone oversleeps on the morning of departure, and they get into a hectic frenzy to not miss the plane. 10 year-old Kevin gets lost at the airport, and in a chain of crazy events he boards the wrong plane – bound for New York! Of course, resourceful and street-smart Kevin decides to make the best of it, and because he was carrying his Dad's bag including wallet and credit card, he is able to book himself into a luxurious suite in a fancy Manhattan hotel. Things get more complicated when a concierge notices that the credit card is registered as stolen. Terrified of getting arrested for credit card fraud, Kevin runs away to turn to an uncle who lives in New York but finds his house vacant and under renovation. To top things off, the same two criminals, Harry and Marv (Joe Pesci and Daniel Stern), who tried to burgle Kevin's house the year before, have escaped prison and are also in New York, planning to rob a toy store. When Kevin learns about their plan, he decides to put a spoke in their wheel and get them arrested once more.

There is frequent and grossly trivialised slapstick violence in this movie including:

Parents should note: Harry and Marv miraculously get away with some minor cuts, burns, and bruises, and clearly don't get as seriously injured as one would expect if some of these things happened to someone in real life. In fact, it could be expected for some of the traps to be fatal. Kevin celebrates each blow triumphantly. These violent scenes are scripted to be funny, which trivialises and legitimises the use of violence.

There are some references to nudity in this movie, including:

Like the predecessor, Home Alone, this sequel, Home Alone 2: Lost in New York, contains some positive messages. These messages fade into the background, however, next to the whole new level of slapstick violence compared to the first film. This is a different level because, firstly, this time, Kevin does not defend his own house that is being attacked, but maliciously lures the shenanigans into a house equipped with traps. Secondly, these traps are not harmless little boy pranks, but in real life, could very well kill someone, many times over. This gross trivialisation and legitimisation of violence makes the film unsuitable for a young audience, and parents should provide guidance and encourage a discussion with their children, aged 8 and over, how Kevin could have dealt with the situation differently.

The main message from this movie is that the end justifies the means (in a very doubtful way) and that family and friends are important.