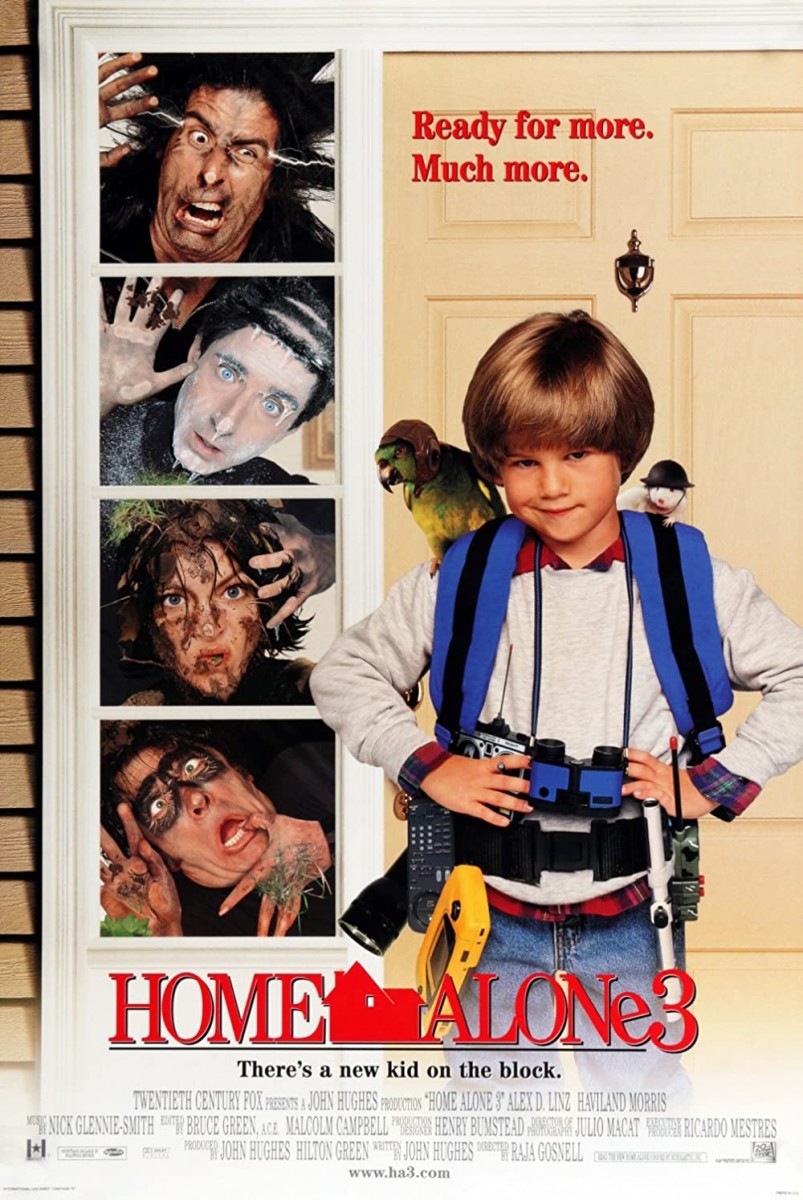 Released in 1997, Home Alone 3 is the third instalment of the popular movie series, Home Alone. Four members of a North Korean terrorist organisation are smuggling a top-secret, missile-cloaking microchip through airport security. The chip is hidden inside a remote-controlled toy car in an inconspicuous shopping bag. As it goes through airport security checks, it is accidentally picked up by an old woman, Mrs. Hess (Marian Seldes), who is on her way back to her suburban home in Chicago. The four terrorists must follow her to Chicago, find out where she lives and get the microchip back. Back in Chicago, Mrs. Hess gives the toy car to her next-door neighbour, eight-year-old Alex Pruitt (Alex D. Linz), as payment for clearing the snow from her front path. Shortly afterwards, Alex develops chickenpox and needs to stay at home until the virus passes. With his mother needing to work and his father away, Alex is left all alone at home. Alex loves to make quirky and fun inventions and his room is full of great engineering projects that do useful things, like feed his fish or change the television station on his next-door neighbour’s television set! As he watches in boredom out of his bedroom window, Alex notices suspicious behaviour going on in the neighbourhood whilst everyone is out at work. When both his attempts to alert the police fail and get him into trouble for wasting police time, Alex decides it’s time to take things into his own hands. He uses all his inventing, engineering powers to come up with a series of elaborate booby traps and contraptions to stop the terrorists from breaking into his home and stealing back the microchip. The terrorists get far more than they bargained for and the hilarious slapstick ordeal leaves them in terrible shape!

There are many scenes of slapstick violence for comedic effect in this movie as well as several scenes where guns are pointed at people. These scenes include:

Home Alone 3 follows the basic formula which made the original Home Alone film so popular - a funny, slapstick comedy where the kid gets to beat up the baddies and save the day. Whilst adults might find this a bit silly and the plot tired, many children will love the painful shenanigans and crazy booby-trap inventions. However, the theme of scary terrorists roaming the neighbourhood and threatening a young boy with guns is likely to be a bit much for some children, therefore, the film is unsuitable for children under 8 and parental guidance to 10 is recommended.

The main messages from this movie are that sometimes you just have to take things into your own hands and save the day, and that being creative and clever can be more powerful than being bigger and stronger.